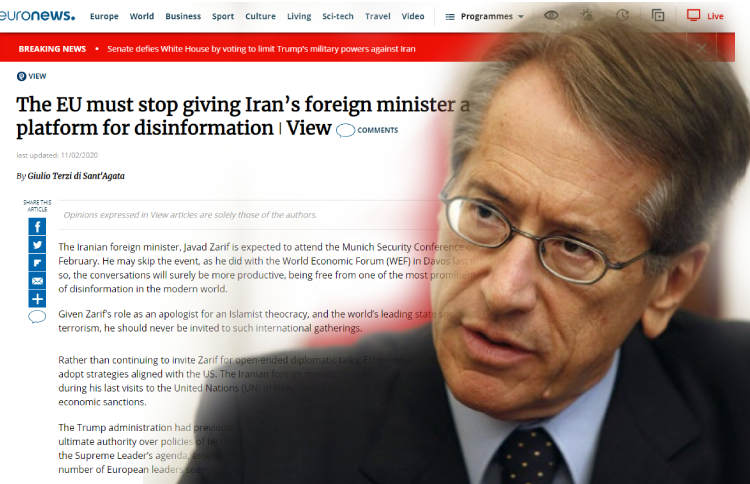 Iranian foreign minister Javad Zarif is set to attend the Munich Security Conference on February 14, but why does the international community keep inviting him to these events when they know he is little more than an apologist and propagandist for the Iranian regime?

Giulio Terzi, former foreign minister of Italy and a member of the Advisory Board of United Against Nuclear Iran (UANI), said that rather than invite Zarif to these events, the European Union should follow the US path and begin to subject Zarif to sanctions and travel limitations.

Terzi, a former Permanent Representative of Italy to the United Nations, wrote: “Zarif is a key enabler of the Supreme Leader’s agenda, essentially acting as a propaganda minister. Nevertheless, a shocking number of European leaders seem oblivious to this fact.”

The Iranian people would not be opposed to this. Indeed, they want nothing less than the overthrow of the regime and increased sanctions on Zarif and other leaders of the regime would help them to achieve this.

How do we know what the Iranian people want? Well, during their most recent uprisings in November and January, the Iranian people chanted “death to the dictator” and “death to [Supreme Leader Ali] Khamenei”. The regime launched a brutal crackdown and killed 1,500 people, but have refused to admit to this crime.

Terzi wrote: “Iranian disinformation – much of it reaching the world directly via the foreign ministry – has previously convinced much of the world that there is simply no alternative to dealing with the existing regime on its own terms. Tehran’s hold on power has long been assumed to be so firm that any efforts to undermine it would only lead to war.”

Of course, it will not result in war. Despite the US’ maximum pressure strategy, we are no closer to war than in 2018. In fact, we may be further away, because the regime is weaker than ever before, and may soon collapse.

Terzi advised that the EU take these steps to support the Iranian people: