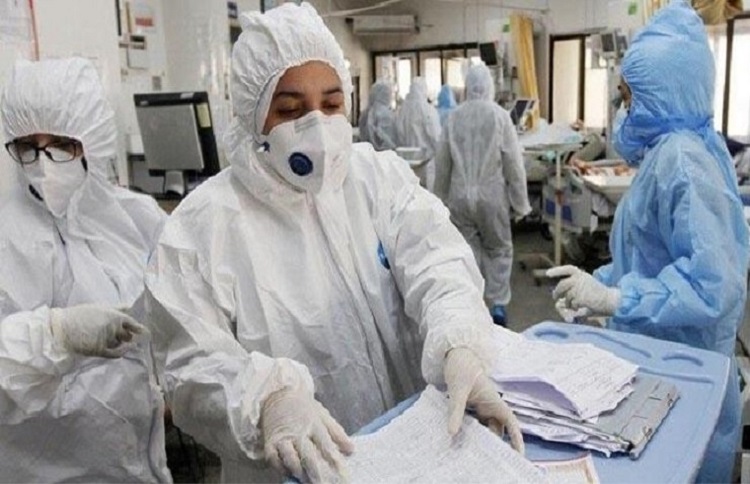 According to an eyewitness report, the Iranian regime severely conceals the death toll of the coronavirus in Qom city. Given the risk of arrest, the source preferred to be anonymous.

In this context, a patient said, “I have ague, but I won’t go to the hospital. Because, they will keep me, and I’ll die [since hospitals are more infectious than anywhere else].

“In Qom, five hospitals have been allocated to coronavirus, however, they cannot collectively hospitalize 100 patients. Therefore, [officials] are running field medical centers.

“Here, [pharmacies] sell each face mask for 30,000 tomans [around two dollars]. All the factories and shops are shut down. [Officials] told them you should shut down! Now, fruits are sold for 20,000 tomans per kilo.”

The source pointed out that four relatives have died from coronavirus so far. Zabihollah Nazari, Ebrahim Shokri, Hossein Chehreghani, and Mohammad Madadi were the four mentioned victims. Remarkably, all these victims are from one family and these days many people fell in the streets in different cities due to infection by COVID-19.

“Now, [officials] dispatched all soldiers to hospitals instead of the nurses. Prison guards took 30 million tomans from prisoners’ [families] to offer them face masks. [The government] told volunteers to aid medical staff in hospitals. The people have been mired in misery and are dying, but the state-run radio broadcasts happy songs.

“[Officials] limited the office hours between 9-12 a.m., which resulted in more congestion in government offices and the infection of more people with the virus. Hospital employees are ordered to announce heart failure as the reason for death from COVID-19.”

Qom was the origin of the coronavirus outbreak in Iran. The Iranian government previously gathered more than 700 Chinese mullahs in this province on the line of improving its foreign policies relying on religious expectations. This matter along with authorities’ avoidance of quarantining this city has prompted public anger.

On the other hand, officials transferred many mullahs to other cities. Several of them went to Zahedan city, southeastern Iran, to escape the virus by using the high temperature of these areas. A number of infected mullahs were also hospitalized in Bandar Abbas city, which raised the public anger and resulted in the torching of the medical center by outraged people who struggle to save their families from coronavirus.

Additionally, the systematic non-transparency and incompetence cause a spike in the death toll in Qom. The People’s Mojahedin Organization of Iran (MEK/PMOI), which is renowned for its accurate reports about the ayatollahs’ secrecy over nuclear bomb-making projects and the death toll of the November protests, announced that 300 people have died from coronavirus in Qom alone. The PMOI/MEK provided this information relying on its domestic network known as the “resistant units.”

Following the government’s concealing of the truth about the coronavirus outbreak, on February 23, the Minister of Interior Affairs Abdolreza Rahmani Fazli admitted that the regime definitely covered-up the scale of the virus spread in order to hold the parliamentary elections. “Some people recommended that we should postpone the elections in Qom, however, as the chief of the elections I rejected all recommendations,” the state-run Khabar Online news agency quoted Rahmani Fazli as saying on the same day.

In this context, the President-elect of the Iranian opposition Mrs. Maryam Rajavi extended her condolences and sympathies with the families of victims, saying, “With utmost regret, the number of victims of Coronavirus (Covid-19) in Qom has been rising quickly. My condolences to the people of Iran and esp. the dear people of Qom. I urge the international community to help save the lives and health of the Iranian people.”

With utmost regret, the number of victims of #Coronavirus (Covid-19) in Qom has been rising quickly. My condolences to the people of #Iran and esp. the dear people of #Qom. I urge the international community to help save the lives and health of the Iranian people. #COVID19

Three day ago, the International Monetary Fund reported about...

The Cause of Violence in Iran’s Society

More often than not, the bitter news published by...