Monday Protests by Students and Shopworkers in Iran 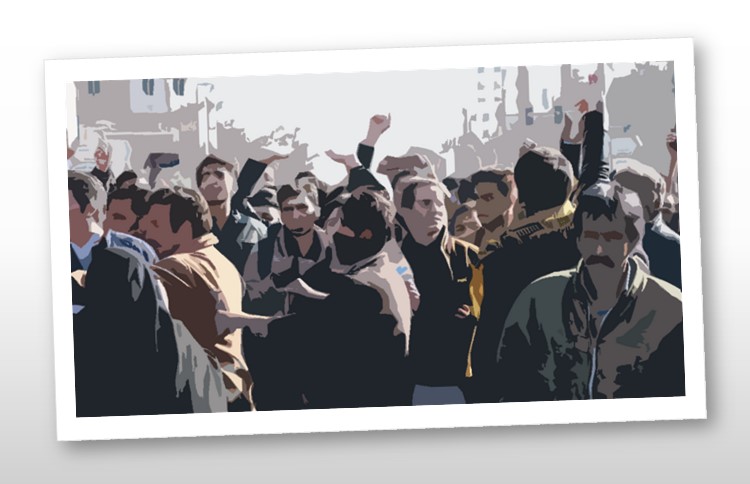 University of Science and Technology students held a rally in Tehran on Monday to protest the Iranian security forces’ recent crimes, including the downing of a passenger airplane and the killing of protesters. During these protests, the students also rejected the parliamentary elections scheduled for Friday.

They held up banners that read:

The last banner is a reference to the slaughter of around 130 protesters by Iranian security forces in Mahshar in November. The protesters had run off to hide in the marshes after being set upon by security forces, but the security forces then used heavy machine guns and armored vehicles to shoot at random into the marshland.)

As expected, the Iranian government sent security forces to crush the protests.

The authorities did the same thing during the student protests in January, which called for the regime change. This terrified the mullahs and now they try to suppress all student gatherings to prevent them from turning into regime change demonstrations.

In Isfahan on Monday, students of the Medical Sciences University’s dental college left class to protest changes to the education system and a shortage of educational facilities.

The students held signs that read: “Students are awake and outraged from hollow promises.”

Elsewhere, merchants and shop owners in Paveh, Kurdistan province, went on strike and shut their businesses to protest crimes against porters by security forces. This was the day after security forces opened fire on porters who were stuck in the snow, killing and injuring several people.

While on Sunday, the families of detained protesters in Sanandaj gathered outside the local office of the intelligence ministry to demand the immediate and unconditional release of their relatives.

Security forces insulted and threatened the families, but the demonstrators made it clear that they will continue their protests until their loved ones are released.

The Iranian security forces killed over 1,500 protesters, injured 4,000, and arrested 12,000 during the November 2019 uprising alone. There are numerous reports that protesters are being tortured in prison in order to force them to make false, televised confessions. Dozens of protesters have died under torture in prison so far.

Protests Continue Across Iran, and Slogans Remain Unchanged After Years

Reuters: Iran has met its commitments to Russia over...