AP: Tehran’s powerful merchants don’t need street protests to make their anger known — the sound of shops being locked up and metal grates clanging shut during a wave of anti-tax strikes this week was enough to unsettle Iranian authorities. 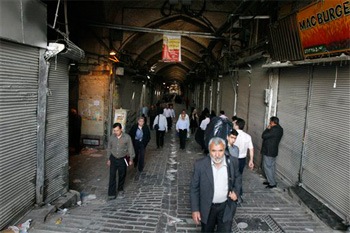 DUBAI, United Arab Emirates (AP) — Tehran’s powerful merchants don’t need street protests to make their anger known — the sound of shops being locked up and metal grates clanging shut during a wave of anti-tax strikes this week was enough to unsettle Iranian authorities.

The closures — with Tehran’s expansive bazaar as the epicenter — present another dilemma for Iranian leaders still trying to weigh the fallout from wider U.N. and American sanctions.

A sustained fight with the influential merchant class would pull Iran’s rulers onto a path littered with warning signs from the past.

The bazaar has been the tipping point in popular unrest for more than a century, including the 1979 Islamic Revolution, when merchants pulled their support from the Western-backed monarchy, paving the way for its ouster and the installment of rule by Islamic clerics.

Until now, the big merchant networks have remained generally on the sidelines in the upheavals since last year’s disputed presidential election, which sparked massive street rallies calling for reform and greater democracy.

“The bazaar merchants have traditionally defended their own commercial interests and like to maintain the status quo unless their interests are threatened,” said Rasool Nafisi, an Iranian affairs expert at Strayer University in Virginia.

“But things are so volatile in Iran now, it’s possible this could turn into a political mess for the government.”

Anti-government websites have called on the merchants to publicly throw their weight behind the opposition movement. That would bring considerable new clout to the dissidents, whose protests have been silenced by security forces.

The merchant networks bring both vast wealth — by controlling the main channels for consumer goods and raw materials — and long-standing alliances with many mainstream Islamic clerics. For decades, the ruling theocracy has counted on the thousands of bazaar families and businesses as some of their most stalwart backers.

“The merchants seem to be moving away from the government,” said Nafisi. “It’s not yet at the point of open confrontation, but there is a sense of a moving away. This could be really important if it continues.”

The battle for the moment is over taxes.

Merchants in Tehran’s main bazaar — the hub of the country’s commerce — began shuttering their shops Tuesday after reports the government planned to sharply increase business taxes. Officials quickly stepped in and promised to keep the levy at the 2008 rate, which ranges up to 15 percent, state TV reported.

But the merchant strikes and protests persisted, led by the influential cloth and weavers union, which reportedly demanded even further government concessions. Some shop owners wore black arm bands, chanted anti-government slogans and scuffled with police on Thursday, the last day of the Iranian work week, according to opposition websites. The bazaar is closed Friday and Saturday is a religious holiday.

The reports said similar strikes were held in other cities around Iran. The accounts could not be independently verified because of wide-ranging restrictions on media coverage imposed by Iranian authorities.

There is a growing sense that economic showdowns may be the next test for Iran’s embattled leadership.

President Mahmoud Ahmadinejad is under pressure to carry out his pledge of sweeping cuts of government subsidies for fuel and food, which are draining an economy already reeling from dropping oil prices and tighter U.N. sanctions over Tehran’s nuclear program.

Further American sanctions target exports of gasoline and other refined petroleum products to Iran, which has some of the world’s largest oil reserves but cannot make enough fuel to meet domestic demand.

On Wednesday, Iran’s nuclear chief, Ali Akbar Salehi, said sanctions could delay the country’s nuclear program but would not stop it.

Ahmadinejad at first supported the subsidy cuts, but he has resisted putting them in place, apparently fearing embarrassing protests. In 2007, Iranians smashed windows and set gas stations ablaze after a system was imposed to ration fuel at the subsidized price — now about 33 cents a gallon (9 cents a liter).

Some analysts wonder if the economic complaints from the bazaar and the reform cries from the political opposition will eventually find a common voice.

“There’s a logic to it,” said Mehrzad Boroujerdi, a professor of international relations at Syracuse University, who follows Iranian affairs.

“If gas prices go up, that means the cost of transportation goes up and that means goods cost more. This part is crystal clear. But is it going to translate into political dissent from the bazaar? We don’t know yet. The jury is still out.”

“The Mojahedin showed extraordinary courage; they are fearless”