AFP:  Iran has to cut imports to overcome the latest round of economic sanctions world powers slapped on the Islamic republic over its nuclear drive, the country’s central bank chief said on Sunday. 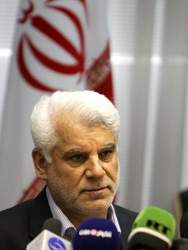 TEHRAN, August 8, 2010 (AFP) –  Iran has to cut imports to overcome the latest round of economic sanctions world powers slapped on the Islamic republic over its nuclear drive, the country’s central bank chief said on Sunday.

“Reducing the consumption of imported goods means confronting the sanctions. There is no other way,” Mahmoud Bahmani told a news conference.

“Sanctions are happening and we should not be scared or frightened. We should convert the sanctions into opportunities.”

The UN Security Council hit Iran with a fourth set of sanctions on June 9 over its nuclear programme. The United States and European Union have since imposed even tougher punitive measures of their own.

Bahmani insisted the way to thwart the effect of the sanctions — which target Iran’s banking, financial and energy sectors — was to cut down on imports.

“We need to decrease imports. We should not allow all goods to enter the country,” the central bank governor said, adding Iran must produce most of the goods itself and also raise taxes on inbound luxury items.

Bahmani also advocated reducing domestic consumption of gasoline, a petroleum targeted by the unilateral US sanctions.

Iran, OPEC’s second largest exporter of oil, depends significantly on imported gasoline to meet its domestic requirements due to a lack of refining capacity.

President Mahmoud Ahmadinejad had called earlier on Sunday for similar action, saying Iran must lift its production levels to a “global scale” in order to “inflict a blow” on world powers.

The hardliner particularly dismissed the “pitiable” European nations, saying Iran’s economy was not dependent on them, according to ISNA news agency.

“They don’t know anything about Iran… Iran’s economy is worth 900 billion dollars and our (trade) exchange with Europe is less than 24 billion dollars. Nothing will happen due to their sanctions,” Ahmadinejad said.

The Iranian president added that even if the sanctions do impact on Iran, that would only be felt in the “next five to 10 years and not during Obama’s term.”

Strike at bazaar spreads beyond Tehran

New York Times: A strike at the traditional bazaar...