Reuters: Iran is struggling with international sanctions aimed at curbing its nuclear ambitions and pressure on its economy and banking sector is mounting, a senior U.S. Treasury official said on Monday. 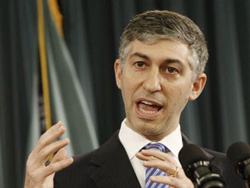 WASHINGTON, Sept 20 (Reuters) – Iran is struggling with international sanctions aimed at curbing its nuclear ambitions and pressure on its economy and banking sector is mounting, a senior U.S. Treasury official said on Monday.

“The financial measures the U.S. and others around the world are implementing are imposing serious costs and constraints on Iran,” Stuart Levey, undersecretary for terrorism and financial intelligence, said in excerpts of prepared remarks.

“We believe Iran’s leadership was caught off guard by the speed, intensity and scope of the new measures, misjudging the strength of the international community’s will.”

Levey, who is due to speak at the Center for Strategic and International Studies on Monday afternoon in Washington, said the pressure on Iran was “creating leverage for diplomacy.”

“We are already receiving reports that the (Iranian) regime is quite worried about the impact of these measures, especially on their banking system and on the prospects for economic growth,” he added.

The United Nations approved a new round of sanctions against Tehran in June, paving the way for tough new U.S. and European Union curbs on its energy sector and banking sytem.

U.S. President Barack Obama has barred firms doing business in the United States from supplying Iran with gasoline and other refined fuels.

The Treasury Department is also imposing strict curbs on foreign banks who do business with blacklisted Iranian entities, effectively forcing them to choose between doing business with the United States or with Iran.

Levey said more countries around the world are willing to take strong action against Iran and now have more effective tools. “Even before the recent round of sanctions, Iran’s investment environment was grim,” he said.

“Now, because of the new measures, and the unwillingness of financial institutions, insurance companies and major energy companies to undertake projects in Iran, the investment landscape for Iran today is even more bleak.”

Levey’s remarks come as a U.N. General Assembly meeting gets underway this week in New York. Foreign ministers from Britain, China, France, Germany, Russia and the United States are expected to meet on the sidelines to discuss sanctions on Iran. (Reporting by David Lawder; editing by Todd Eastham)

Reuters: Argentina's Senate approved on Thursday an agreement with...

Iran’s heavy water plant to be operational within month: official