Iran vows crackdown if merchants strike over cuts in subsidies

Bloomberg: Iran’s government vowed a crackdown against merchants in the nation’s bazaars, an economic force whose 1979 shutdowns helped to topple the monarchy, if the retailers go on strike once subsidy cuts are made. 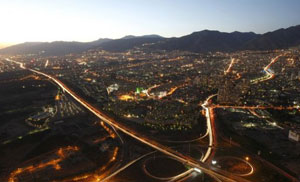 Oct. 7 (Bloomberg) — Iran’s government vowed a crackdown against merchants in the nation’s bazaars, an economic force whose 1979 shutdowns helped to topple the monarchy, if the retailers go on strike once subsidy cuts are made.

“The judiciary will deal with those who are indifferent to the country’s economic context and disturb the public order by closing shops,” prosecutor Abbas Jafari-Dolatabadi was quoted as saying by the state-run Mehr news agency late yesterday.

National police chief Esmail Ahmadi-Moghaddam said Oct. 1 that opposition supporters may try to foment unrest when the state begins phasing out subsidies for fuel and basic consumer goods in the country of more than 70 million. After many delays, the government said the cuts may begin within the coming weeks.

The five-year plan to end subsidies comes amid an increase in sanctions against Iran over its nuclear program. The United Nations imposed a fourth round of sanctions June 9. The U.S. approved its own stepped-up measures July 1, targeting Iranian fuel importers and banks. The European Union followed, banning investment and sales of equipment to Iran’s energy industries.

Until recently, a four-member Iranian household with a typical annual income of about $3,600 a year received an average of $4,000 annually in subsidies for oil and gas, the International Monetary Fund said Sept. 29.

The Economy and Finance Ministry said the poorest households will start receiving grants this week, ahead of gradual price increases that may be announced this month. Officials haven’t said what prices will be under the new system.

Some of Iran’s gold merchants went on strike last month to protest the enforcement of a value-added tax, saying they hadn’t been fully informed about the impact of the measure on their businesses, Mehr said in the report.

While modern stores have changed Iranian shopping habits, many still rely on the bazaars’ retailers for basic goods. Subsidies have been a tenet of the Islamic establishment since it took power in a 1979 revolution, accounting for 27 percent of Iran’s economy in 2007, with energy consuming the largest share. Several Iranian lawmakers have warned that cutting subsidies may fuel inflation and reduce growth.

In June 2009, mass demonstrations followed the announcement that President Mahmoud Ahmadinejad had won a second term, posing the biggest challenge to the establishment since the revolution and prompting a crackdown by security forces. More than 5,000 people were arrested in the weeks after the vote. Official figures show 44 people were killed in the unrest. Amnesty International said the toll was at least twice as high.

Iran’s nuclear program must be stopped at all costs: Asselborn

AFP: The world community must "do everything" to stop...