Wall Street Journal: BP PLC will likely have to shut down a natural gas field in the North Sea that it jointly owns with Iran, a sign that tough new European sanctions are beginning to affect the Islamic Republic’s oil and gas sector.

By GUY CHAZAN And BENOIT FAUCON

BP PLC will likely have to shut down a natural gas field in the North Sea that it jointly owns with Iran, a sign that tough new European sanctions are beginning to affect the Islamic Republic’s oil and gas sector.

The sanctions are designed to bring Iran to the negotiating table over its nuclear program. 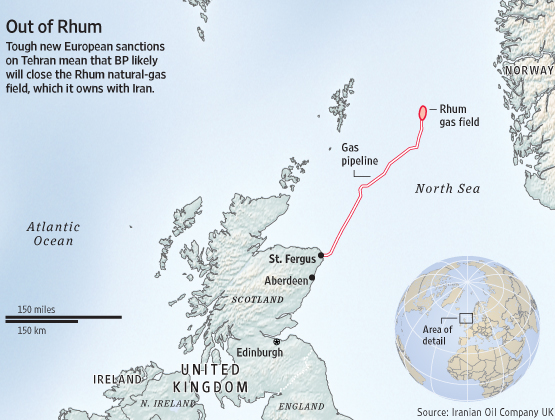 A spokesman for the EU foreign-affairs chief Catherine Ashton said the new sanctions would affect Rhum, a gas field co-owned by BP and a state-owned Iranian oil company, “and could lead to its closure.”

In and of itself, the shutdown of Rhum would have few repercussions for BP, the U.K., or Iran. It is a small field, producing the equivalent of 15,000 barrels of oil a day, and accounts for just 5% of BP’s U.K. North Sea oil and gas production, the company says. EU officials say it is the only Western-Iranian joint venture of its kind in Europe.

However small the impact, the field’s closing underscores how tightening sanctions are beginning to take a toll on Iran’s energy sector, which has been hit by a steady drumbeat of defections by Western corporate interests.

Since June, the United Nations, the European Union and U.S. have been stepping up measures aimed at deterring Tehran’s nuclear program. Iran says its nuclear ambitions are peaceful, but the U.S. and others say they are directed toward weapons production.

In recent months, a number of big oil companies and oil-trading firms have stopped supplying gasoline to Iran, while a clutch of big refiners have halted imports of Iranian crude.

Several major energy companies such as Repsol-YPF of Spain have pulled out of contracts to develop the Islamic Republic’s vast gas reserves and big engineering firms have stopped their foreign subsidiaries from selling equipment and parts to Tehran.

Compliance with sanctions hasn’t been universal, however. This year, Russia completed construction of Iran’s first nuclear-power station near the port city of Bushehr, and Iranian engineers began fueling the reactor core Tuesday. A number of South Korean companies are still involved in Iranian energy projects and Russia’s OAO Gazprom is in talks to develop the country’s oil and gas fields.

BP said it is waiting for the EU to publish its regulation on Iran, setting out the details of the new sanctions, and until it had seen them “we can’t assess the potential impact it may have on our operations at Rhum.”

A spokesman emphasized “BP always complies with legislation in the countries where we operate.”

The U.K.’s foreign secretary, William Hague, praised the new sanctions as a sign of the EU’s willingness to get tough with Iran.

He said: “This is the EU using its collective weight in the world absolutely in the right way, working with the U.S. and sending a clear message to Iran that it is important to negotiate on its nuclear program and that the pressure from Europe will intensify in the absence of those negotiations.”

The U.K. Foreign Office declined to say whether the BP-Iranian joint venture would have to close.

The matter was, a spokesman said, “for BP to decide how to adapt their activities at Rhum to ensure compliance with the Regulation.”

The spokesman acknowledged that the sanctions would have an effect on British businesses.

“However,” he added, “the potential cost to the U.K. of Iran continuing with its current nuclear program is far greater.”

The joint venture to operate the Rhum natural-gas field was set up during the early 1970s, when Iran was still ruled by the Shah.

Gas was discovered in the field in 1977, two years before the Iranian revolution, but because of the technically challenging nature of the reservoir, it only started producing in 2006.

The loss of Rhum will have little bearing on Iran’s oil and gas income.

Corporate filings made in April by the Iranian partner, Iranian Oil Co. UK, a subsidiary of state-controlled Naftiran Intertrade Co, showed it had revenue of £54.5 million ($85.78 million) from the field in 2009, and earned a profit after tax of £17.6 million, after posting a loss of £62.7 million in 2008.

The report suggested sanctions had already complicated IOC U.K.’s business, though they hadn’t yet had a material impact.

“As a result of U.S. sanctions restricting trade with Iranian-controlled entities, the company will avoid using any equipment sourced from the U.S. or from U.S.-owned companies in its next projects and will replace all restricted equipment as soon as possible,” the annual report said.