AFP: Domestic petrol prices shot up as much as fourfold on Sunday as the Iranian government started to implement a controversial plan to remove subsidies on energy and food products. 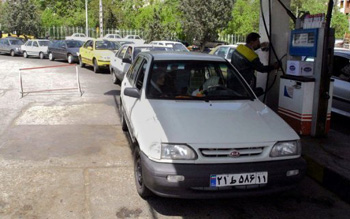 TEHRAN (AFP) — Domestic petrol prices shot up as much as fourfold on Sunday as the Iranian government started to implement a controversial plan to remove subsidies on energy and food products.

Iran previously had two prices for petrol, with motorists allocated a quota of 60 litres (16 gallons) of petrol per month at a subsidised price of 10 US cents per litre. Beyond this quota, they had to pay 40 cents a litre.

From Sunday, motorists have to shell out 40 cents for the monthly quota of 60 litres, and 70 cents for the rest of their purchase of petrol, a hike of 75 percent, state television announced on its website.

In a late-night interview on state television, President Mahmoud Ahmadinejad announced that the scrapping of subsidies would start to take effect from early Sunday.

The government plans to phase out subsidies on energy products such as petrol, diesel, gas, kerosene and electricity, and food items such as water and bread.

According to official estimates, subsidies on these products cost state coffers around 100 billion dollars a year.

Soon after Ahmadinejad’s announcement, AFP reporters saw motorists queueing outside petrol stations in Tehran to fill up their tanks before the new fuel prices were announced.

Tehran governor Mortaza Tamaddon urged people “not to gather at petrol stations as there was no problem to meet the city’s need for petrol,” state news agency IRNA reported.

On Saturday, however, Iranian authorities gave 50 litres of petrol at a price of 10 cents as an exceptional measure, media reports said.

Ahmadinejad has been severely criticised by various groups for the subsidy removal plan which has been delayed by three months.

Part of Iran’s ruling conservative camp says the plan would further stoke inflation at a time when the economy is already reeling under high price rises and unemployment.

But the government has toned down the potential impact of the plan and maintains that inflation itself has already fallen to single digits.

Parliament had also tried to delay and limit implementation of the measure by challenging the government’s sole authority to decide on how to distribute among the poor the savings generated from the scrapping of subsidies.

The Islamic republic’s supreme leader, Ayatollah Ali Khamenei, has backed the plan despite the concerns of some conservatives.

To offset the rising prices, Ahmadinejad’s government has begun to pay part of the expected savings from subsidy removals in the form of direct aid to the people.

According to official figures, some 60.5 million Iranians have already started to receive 810,000 rials (74 dollars) paid into bank accounts every two months. This represents 2.5 billion dollars a month in the state budget.

Ahmadinejad warned that the foreign media were acting against his subsidy scrapping plan. “They don’t want Iran to progress and become a model country where there are no poor,” the hardliner said.

Bloomberg: Iran will pare handouts to millions of citizens in...