Fears of unrest after Iran cuts food and fuel subsidies

BBC: While President Mahmoud Ahmadinejad was outlining his targeted subsidies plan to the people on television on Saturday, riot police were deploying in Tehran’s streets to deal with any protests the lifting of subsidies might trigger. 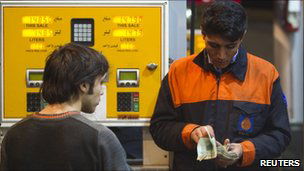 While President Mahmoud Ahmadinejad was outlining his targeted subsidies plan to the people on television on Saturday, riot police were deploying in Tehran’s streets to deal with any protests the lifting of subsidies might trigger.

The impact of the cuts on people’s lives is still unclear, but anxiety is widespread.

According to official statements the price of flour could be 40 times higher, petrol would cost between four and seven times more, gas five times more, and electricity and water about three times more.

This could make life very expensive in big cities like the the capital, where many residents already work two jobs to cover their living costs.

The government has transferred 810,000 rials ($80) to the bank accounts of Iranians who have registered for compensation for the sudden price increases. They are due to receive the stipend every two months.

And in his two-hour announcement of the subsidy plan on state television, Mr Ahmadinejad promised to double this compensation next year.

But many people doubt this will be adequate cushioning from the increase in prices for the poor.

Shahrbanoo, a 57-year-old widow waiting in the long queue at a state bank, burst into tears when she found out that she had not received the money promised by the president.

“I am not familiar with the internet and new technologies, I have not completed the registration process. How can I afford to live with two daughters at home and pay the rising costs?”

Mohammad, 32, and married last month, said that he was worried and uncertain about his future.

“I am a driver. The price of petrol has gone up, while I cannot increase my fees in the same way… I have to quarrel with customers about money all the time.”

Under the subsidy system, Iranians have enjoyed some of the lowest petrol prices in the world – paying as little as $0.40 (25p) per gallon ($0.10 per litre).

But the country, which has some of the world’s biggest oil reserves, has been forced to import refined fuel to meet domestic demand.

Over the past two decades, successive governments promised a major overhaul of costly public spending, but none carried it out.

Blanket subsidies swallow a large share of the national budget and are criticised by economists for causing wastefulness.

As much as one-third of bread made with subsidised flour in Iran is said to be simply thrown out.

But in Iranian culture and diet, bread is central. Bread and cheese are symbols of humbleness and are seen as food of the poor.

However, the price of both are going up noticeably across the country.

The owner of a bakery in northern Tehran faced many angry questions from customers about bread prices.

“Officials should not play with the bread of the people. It may be polluted with blood,” he said, referring implicitly to his expectation that riots would follow.

Some opposition politicians and business people argue that poor handling of reforms could lead to massive inflation and civil unrest.

“This plan, if it is not implemented prudently, will certainly create a crisis in the country,” said one reformist MP who asked not to be named.

“Compared to the post-election events, this time the core of the crisis will be shifted from the middle class to the working class of the country, from which the political system receives a huge amount of its support.”

The Guardian: Doubts surrounded the future of Iran's foreign...