AFP: India has banned trade in all goods and services with Iran that could help Tehran pursue development of nuclear weapons, a government statement said. 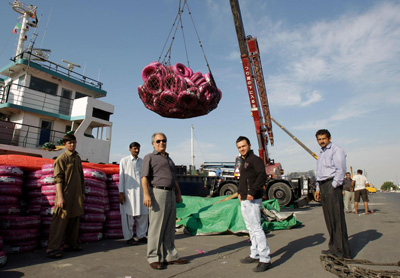 NEW DELHI, April 2, 2011 (AFP) – India has banned trade in all goods and services with Iran that could help Tehran pursue development of nuclear weapons, a government statement said.

The changes were made in new foreign policy trade rules to conform with a UN Security Council resolution imposing sanctions on Iran related to its nuclear and missile development programme, said the commerce ministry.

India sits as a non-permanent member of the UN Security Council.

The changes posted on a government website Saturday ban trade in all equipment, goods and technology which could contribute to Iran’s enrichment-related, reprocessing or heavy water-related activities or to the development of nuclear weapon delivery systems.

Energy-hungry India, which has long enjoyed warm ties with Iran, has been treading a delicate path in its relationship with the Islamic republic as the United States presses New Delhi to break commercial links with Tehran.

The export ban comes as India has been struggling to work out a long-term method to pay for oil imports from Iran.

Iran is the second-largest crude supplier to India after Saudi Arabia and supplies up to 14 percent of the country’s oil import needs. India imports around 80 percent of its crude oil.

India’s central bank, in response to US pressure, said in December oil and other import payments could not be made through a Tehran clearing house which Washington alleges is being used to bypass sanctions against Iran.

The decision meant India no longer had a means to pay for the fuel.

India and Iran have been negotiating for months on ways to resolve the payment deadlock on a long-term basis and salvage the trade, which is worth around $12 billion annually.

Late last month, Germany’s Handelsblatt business daily said India was set to pay Iran for billions of dollars worth of oil imports by channeling funds to Tehran via the German central bank.

There has been no comment from India but earlier, government officials said such a route could be a way to break the payments deadlock.

Iran: We will continue nuclear work regardless of UN resolutions

AFP: Iran believes that a military strike against its...