By Thomas Erdbrink and Joby Warrick 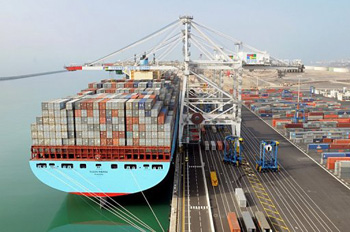 TEHRAN — On June 30, the Danish shipping giant Maersk startled Iran’s trade officials by abruptly pulling out of the country’s three largest ports. Company officials said little about the decision, but the timing was striking: A week earlier, the Obama administration had declared the ports’ operator to be an arm of Iran’s Revolutionary Guard Corps, a group linked to terrorism and weapons trafficking.

Other shipping companies followed suit, and soon Iran was scrambling to find alternative ways to import food and other critical supplies. Now Iranian officials are warning of economic pain in the months ahead — precisely the effect that U.S. officials were hoping for.

After two years of failed efforts to entice Iran with diplomatic carrots, the Obama administration is quietly toasting successes at using economic sticks. A series of U.S. and international sanctions imposed over the past year have slowly undermined Iran’s ability to conduct trade by targeting the country’s access to international banking, insurers and transportation companies. Like Maersk, some firms voluntarily cut ties with Iranian companies that U.S. officials say are front operations for the Revolutionary Guard.

At the same time, the United States has backed international efforts to lower global petroleum prices, bringing the collateral benefit of stripping Iran of revenue that it has used to offset the economic costs of sanctions.

The measures have not slowed Iran’s race to make the enriched uranium needed to produce a nuclear weapon. But current and former U.S. officials say the sanctions are having unparalleled success in creating significant hardships for key Iranian industries.

“The impact is real,” said National Security Council spokesman Tommy Vietor, describing canceled or frozen projects in Iran’s energy sector alone that total $60 billion. With sanctions broader and deeper than ever, Iran finds it difficult to “do business with any reputable bank internationally, to conduct transactions in euros or dollars, to acquire insurance for its shipping, [or] to gain new capital investment or technology infusions,” Vietor said.

The U.S. actions have generated defiance among Iranian leaders and criticism from some Iran experts, who say the sanctions will harm ordinary Iranians more than the rulers — something the United States has generally sought to avoid. President Mahmoud Ahmadinejad last week sharply condemned Washington’s efforts to isolate Iran and insisted that the moves would backfire.

“Our efforts and powerful hands will ensure that our industry and production grow by dozens,” he told a group of industrialists. Iran also has lodged complaints at the United Nations, accusing the United States and other Western powers of depriving Iranians of basic rights.

But other Iranian officials acknowledge that the impact of the sanctions on banking and transportation companies will be immediate and prolonged. A series of economic measures approved by Ahmadinejad over the past six years has made Iran increasingly dependent on cheap imports of meat, bread and fruit. Iran also relies on imports of a wide variety of goods from Asia and Europe, including computer chips and luxury cars.

Almost all goods are transported by container ships sailing to Iran’s main ports on the Persian Gulf.

“Unfortunately, we are importing unprecedented amounts of food, which makes us vulnerable to such moves by the United States,” said Behzad Ghareyazie, a food expert at Tehran’s Center for Strategic Research, an institute led by an Ahmadinejad opponent. “Stopping our food imports means a serious imperilment of our national security.”

From 2005, when Ahmadinejad came to power, until last year, Iran took in nearly $500 billion in total oil revenue, more than the combined earnings of all previous Iranian governments since the 1979 revolution.

But recent moves by the United States and Saudi Arabia are beginning to test Iran’s economic reliance on oil. The two countries worked in tandem to lower oil prices after the Organization of the Petroleum Exporting Countries — with Iran serving as chairman — decided against doing so at its June 8 meeting. The Obama administration released a portion of the U.S. strategic oil reserve, and Saudi Arabia simultaneously pledged to unilaterally increase production.

The price of oil quickly dropped $8 a barrel, but it has since rebounded.

“The Americans and Saudis are using oil as a weapon against us,” said Reza Zandi, an independent oil and gas expert based in Iran.

Even as the oil strategy was being formulated, the Obama administration was preparing sanctions targeting Iran’s shipping, including the vessels and facilities that transport Iranian crude. Among the companies blacklisted was Tidewater Middle East Co., which operates seven main port facilities in the Islamic republic, including the massive port at Bandar Abbas, near the Strait of Hormuz.

Documents released by the Treasury Department alleged that Tidewater is partly owned and controlled by officials of the Revolutionary Guard, the elite military organization that supports Islamist militant groups such as Hamas and Hezbollah. The guard also has long been associated with acquiring technology and parts for long-range missiles and uranium processing.

The act of publicly linking the port operator to the Revolutionary Guard was enough to prompt several large shipping firms to rethink their business relations. The shipping and oil group formally known as A.P. Moeller-Maersk — the world’s largest container firm — was the biggest to sever its connections with Tidewater.

Obama administration officials who closely follow the sanctions’ impact say they are looking for ways to ratchet up the pressure.

“We are continuing to look seriously at additional measures,” David Cohen, confirmed last month as the Treasury undersecretary for terrorism and financial intelligence, said in an interview. “On the one hand, we want to make clear to Iran that we remain open to a meaningful discussion of its nuclear program. But we’re also making it clear that as long as they continue on this path, they will face consequences.”

Some Iranians question the extent of the sanctions’ impact. Davoud Sameni, a broker for Iranian shipping companies, said his biggest problem these days is finding spare containers for shipping cargo to China.

“They told me we had to wait for a month because all containers were reserved,” he said. “The Western sanctions have not been without effect, but business with Asia is booming.”

Bush rules out meeting with Irans Ahmadinejad at UN