Reuters: Iran’s currency has slid 20 percent against the dollar in the last week despite central bank intervention, and Iranians concerned about the economy said on Tuesday attempts to send text messages using the word “dollar” appeared to be blocked. 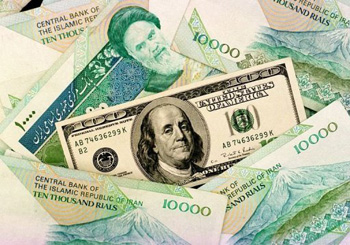 TEHRAN, Jan 10 (Reuters) – Iran’s currency has slid 20 percent against the dollar in the last week despite central bank intervention, and Iranians concerned about the economy said on Tuesday attempts to send text messages using the word “dollar” appeared to be blocked.

The central bank reportedly pumped $200 million dollars into the market last Wednesday after new and much tougher U.S. sanctions prompted nervous Iranians to change rials into hard currency, accelerating a rise in the price of dollars on the open market.

Saying it would act to stabilise the currency, the Central Bank of Iran (CBI) imposed a rate of 14,000 rials to the dollar – up from record lows of around 18,000 rials – but many exchange offices would not sell at that price.

By Tuesday the exchange rate had risen again to around 17,000 rials, according to exchange bureaus, 50 percent more than the CBI’s “reference rate” of 11,240 rials.

The currency slide is a huge risk for consumer prices in a country where the official inflation rate – considered an underestimate by many economists – is already around 20 percent and rising.

In a hint of political sensitivity over the issue, Iranians, long used to controls over Internet and mobile communications, said they were unable to send text messages containing the word “dollar”.

“My colleagues and I tried to text each other in the office and to our surprise we found that texts that included words like ‘dollar’ and ‘foreign currency’ could not be delivered,” said Malek, a 45-year-old government employee in Tehran.

The inflationary pressure comes a year after President Mahmoud Ahmadinejad’s government slashed subsidies on food and fuel, sending historically cheap gasoline and utility prices soaring. Items like food, clothes and electronics have also become much more expensive to buy from abroad, and domestic manufacturers will have to pay more for imported intermediate goods.

The head of the Iran-China Joint Chamber of Commerce, Asadollah Asgaroladi, estimated that annual inflation stood at 40 percent this month and that it would have been 27 percent without the currency slide, Khabaronline, a website close to the government, reported.

“I said earlier that if the government fails to control inflation, implementing the subsidy reform plan would be dangerous,” Asgaroladi was quoted as saying.

The currency problem is a major political headache for Ahmadinejad ahead of March 2 parliamentary elections, not least because it could be seen as a consequence of the sanctions he has long said would not hurt the economy.

The West has intensified sanctions on Iran in a bid to force it to curb the nuclear work that many countries fear is aimed at making atomic weapons. Tehran has repeatedly denied that charge, but an official on Monday confirmed that the country had begun enriching uranium, a key step in the process of producing a nuclear weapon.

On New Year’s Eve, U.S. President Barack Obama signed into law by far the toughest financial sanctions yet against Iran, which if fully implemented could make it impossible for most countries to pay for Iranian oil.

The Islamic Republic responded to the growing international pressure by warning last week that it could shut the Strait of Hormuz, the shipping lane for the Gulf’s oil, if sanctions were imposed on its oil exports.

Ahmadinejad has been at odds with the central bank governor over the appropriate policies to control inflation, blocking him from raising interest rates on bank deposits that were lowered to below-inflation levels in April, prompting a progressive slide in the rial.

The CBI said on Monday it would raise interest rates on foreign currency deposit accounts but has yet to change the more common rial account rates.