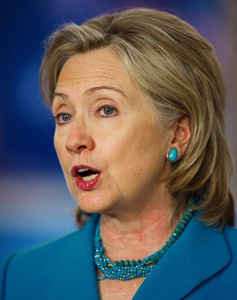 “The United States is deeply concerned with the Iranian government’s continued persecution of Bahais and other religious minority communities in Iran,” Clinton said in a statement.

“The United States is committed to defending religious freedom around the world, and we have not forgotten the Bahai community in Iran,” she added.

“We will continue to speak out against injustice and call on the Iranian government to respect the fundamental rights of all its citizens in accordance with its international obligations.”

They were arrested in May 2008 and this year were tried on charges ranging from spying for foreigners, spreading corruption on Earth, undermining Islam and cooperating with Israel.

“The United States strongly condemns this sentencing as a violation of Iran’s obligations under the International Covenant on Civil and Political Rights,” Clinton said.

Clinton was referring to the 1966 UN treaty on fundamental freedoms, which Iran ratified before the 1979 Islamic revolution overthrew the pro-Western shah.

Earlier this week, Clinton cited the same treaty in a reprimand of Iran’s plans to execute political dissidents, an 18-year-old who faces possible execution over homosexuality charges, and a woman who faced death by stoning after being found guilty of adultery.

She also named three political dissidents who were detained after high-profile street protests in 2009.

“We are also concerned about the fate of Iranians who are in danger of imminent execution for exercising their right to free expression after the June 2009 elections,” Clinton said in a statement, naming Jafar Kazemi, Mohammad Haj Aghaei, and Javad Lari.

“The United States urges the Iranian government to halt these executions in accordance with its obligations,” she said, calling for “the immediate release of all political prisoners and imprisoned human rights defenders.”

Amid tensions over Tehran’s nuclear aims, Washington has insisted in recent weeks that it remains open to talks on its nuclear program but said sanctions would be pursued in the interim.

“We remain open to engagement. But they do know what they have to do. They have to reassure the international community by words and actions as to what their nuclear program is intended for,” Clinton said in an interview with The New York Times released Sunday.

“And so whether it would take six months, a year, or five years, it’s that deep concern about Iran acquiring nuclear weapons that is the preoccupation of our friends and partners,” she said.

But Washington, she added, would pursue the sanctions path “regardless of any issue of timing, because we think it’s got the best potential for changing Iranian behavior.”

Earlier this month, President Barack Obama cautiously welcomed the effects of new sanctions on Iran but said he remained willing to talk with Tehran about its nuclear program.

Washington and other world powers suspect that Iran is masking a weapons drive under the guise of a civilian atomic program. Tehran insists its nuclear program has no military aims.

Reuters: Russia opposes new sanctions against Iran over its...