The Hill: In late July 1988, the Iranian government began the massacre of political prisoners that continued for several months and resulted in the slaughter of more than 30,000 political prisoners, the overwhelming majority of them activists of the People’s Mojahedin Organization of Iran (PMOI/MEK).

By Lord Kenneth Maginnis of Drumglass 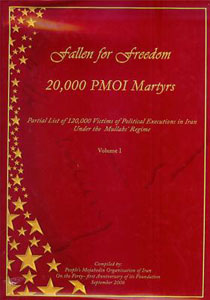 Can the U.S. make a deal with an Iranian regime that still marches on towards the development of nuclear weapons following the election of Hassan Rouhani President?

One may hope the answer to be “Yes” – but a review of Tehran rulers’ conduct over the past 25 years gives little encouragement.

In late July 1988, the Iranian government began the massacre of political prisoners that continued for several months and resulted in the slaughter of more than 30,000 political prisoners, the overwhelming majority of them activists of the People’s Mojahedin Organization of Iran (PMOI/MEK). All were executed; very few political prisoners in Iran were spared and eyewitnesses were murdered, too.

In the final phases of the Iran-Iraq war, the Ayatollah Ruhollah Khomeini, who felt that defeat was imminent, decided to take out his wrath on the political prisoners. He issued fatwas (religious decrees) ordering the massacre of anyone who had not repented and was not willing to totally collaborate with his regime.

Hundreds of political prisoners were hanged and their corpses buried hurriedly in mass graves all over major cities, in particular Tehran.

Khomeini decreed: “Whoever at any stage continues to belong to the Monafeqin (PMOI/MEK) must be executed. Annihilate the enemies of Islam immediately.” He went on: “… Those who are in prisons throughout the country and remain steadfast in their support for MEK/PMOI are waging war on God and are condemned to execution … it is naive to show mercy to those who wage war on God.”

The actual execution process began in the early hours of July 19, 1988 with the isolation of the political prisoners from the outside world. Prison gates were closed; scheduled visits and telephone calls were cancelled; letters, care packages, and even vital medicines from the outside were turned away; and the main law courts went on an unscheduled vacation. Even relatives of prisoners were forbidden to congregate outside the prison gates. There was a total blackout that continued for three months.

Inside the prison, cell blocks were isolated from each other and cleared of radios and televisions. Places where prisoners gathered communally, such as lecture halls, workshops, and infirmaries, were all closed down and inmates were confined to their cells. Prison guards and workers were ordered not to speak to prisoners. One prisoner constructed a homemade wireless set to listen to the radio news from the outside, but found that news broadcasters were saying nothing at all about the lockdown.

The Iranian regime did not inform the victims’ families about the retrials until the executions had been carried out and the bodies had been buried in mass graves. Once informed, the families were not told of their loved ones’ burial spots and were ordered not to erect any monument or hold any ceremony.

Victims were simply determined by whether they had any allegiances to the PMOI/MEK. The PMOI prisoners comprised more than 90 percent of the inmates. If they were not willing to collaborate totally with the regime against the MEK, it was viewed as a sign of sympathy to the organization and the execution was immediate.

The haste to execute was so abhorrent that some of Khomeini’s closest confidantes, most notably Hossein Ali Montazeri, Khomeini’s heir apparent, could not tolerate the decree and protested it. In letters to Khomeini, Montazeri urged some leniency. But Khomeini ordered there should be mercy to anyone, including teenagers. He said pregnant women should not be spared or even be given chance to give birth to their children—and should be executed immediately.

Do not forget that Hassan Rouhani, the newly-elected president of the regime was deputy commander-in-chief of the regime’s armed forces at the time! Moreover, since 1982, he was a member of the regime’s Supreme Defense Council and a member of the Central Council of War Logistics. In those positions, he was always fully cognizant of these hideous crimes; was obviously in full conformity and did nothing to stop the massacre.

All the key players in Tehran today, including Rouhani, held executive positions at the time of the massacre. The political massacre that occurred 25 years ago in Iran cannot and must not be forgotten. How can it be ‘normal business as usual’ with these blood-drenched rulers in Tehran?

It is long past the time when the West can assume that new leadership heralds new ideas and can be accepted in good faith. It is time to stand firm with the victims and Iranian people.

Iran spent over $1 billion on meddling in Iraq: Defence Minister

Iran open to incentives on nuclear talks, with a hedge