RadioFreeEurope: The families signed a letter calling for the creation of a truth commission to investigate the incident, which opposition websites described as unprecedentedly violent.The families are calling for the resignation of Iranian Justice Minister Mostafa Pourmohammadi. 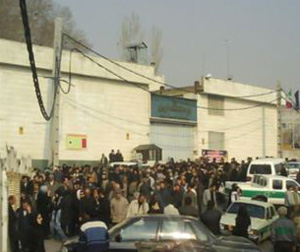 Families of political prisoners demonstrated outside the presidential office in Tehran on April 22 to protest what they say was a brutal raid at a notorious prison in the Iranian capital where their relatives are being held.

The protesters say several of their loved ones were badly beaten by security forces in the April 17 operation at Evin prison and called on authorities to investigate the incident.

About 30 were reportedly transferred to solitary confinement following the raid, in which several journalists and at least one prominent human rights lawyer — Abdolfatah Soltani — were said to have been attacked.

One of the protesters told RFE/RL that the families signed a letter calling for the creation of a truth commission to investigate the incident, which opposition websites described as unprecedentedly violent. He said the families are calling for the resignation of Iranian Justice Minister Mostafa Pourmohammadi, who has denied there was a crackdown and said that only two prisoners were slightly injured.

A witness at the protest said several of the prisoners’ relatives were invited into the presidential office to meet with authorities.

A YouTube video (below) said to be from the protest shows a group of men and women calling for the release of political prisoners.

“Political prisoners should be released,” they chant. “Evin has become Palestine. Government, why are you sitting idly by?”

In addition to Pourmohammadi, other Iranian officials have dismissed reports about the attack as well.

The head of Iran’s Prisons Organization, Gholam Hossein Esmaili, has said the incident was a routine inspection. Esmaili has rejected reports about the raid as lies and fabrications circulated by opponents of the Islamic republic.

Speaking on April 22, Esmaili said guards had discovered SIM cards, mobile phones, and “many other things” in their inspection of Evin’s section 350.

The demonstration was the second by families of the prisoners who say they are worried about their jailed relatives. The families also gathered in front of Iran’s parliament on April 20, holding pictures of their relatives.

Some of the families who were allowed to visit the prison on April 21 have said the prisoners still showed signs of injuries stemming from an assault.

Demonstrations that are not organized by the state or hard-liners are a rarity in Iran. In the past, security guards have used force to disperse political protests.