The wishes of the Iranian mullahs 2016 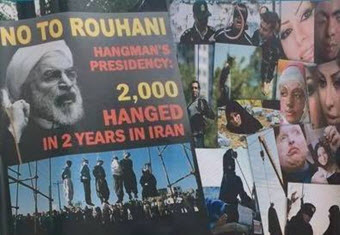 By: Simin Nouri, President of Iranian Women’s Association in France

The news has just come in at the beginning of the year: nineteen executions in Iran in the space of four days, three of which were public hangings with horrifying images published in the country’s official newspapers.

Is this an indication of the dramatic comeback of Rouhani’s Iran in the arms of the international community and his way of presenting his best wishes for the New Year?

Indifferent to the 62nd consecutive condemnation by the United Nations General Assembly last December, the regime’s Supreme Leader continues to hang and punish.

Human rights organizations and defenders closely follow the many abuses of this theocracy that has been regularly condemned for 35 years and makes it an unworthy member of the United Nations.

While the Iranian government is a signatory to most international conventions, including the UN Charter, the government of “moderate” Rouhani cares very little about the Universal Declaration of Human Rights.

In Iran today, the Iranians are not “free and equal in dignity and rights” (Article 1). Under the Khomeinist doctrine of Islamic caliphate, “God’s laws” outweigh the freedom, equality and dignity seen by the laws of men.

Iranians do not have “the right to life, liberty and security of person” under the Supreme Leader’s rule (Article 3). Again, there is a “humanist” vision that does not conform to the tenets of Sharia mullahs.

Iranians are “subjected to torture, cruel, inhuman or degrading treatment” (Article 5). The Islamist caliphate ruling Iran for 37 years considers torture, flogging, public hanging, amputation or the law of retaliation as being for the good of society and the washing of corruption.

Iranians do not have the “right to an appeal before the national courts” (Article 8). Need it be reminded that in Iran national courts are subject to the laws of the mullahs’ Sharia?

Iranians can be “arbitrarily arrested, detained or exiled” (Article 9). No reminder is needed that one lives under a religious dictatorship.

Iranians do not have the “right to freedom of opinion and expression ‘(Article 19) … These concepts are synonymous with freedom to blaspheme in the “Islamic Republic” of Iran.

The voice of indignation rises increasingly in Iran against the wave of hangings, some of which are public. Deprived of freedom of expression, the angry cry of the victims’ families echoes through social networks that are heavily censored.

On his Facebook page, Sholeh Pakravan, the bereaved mother of Reyhaneh Jabbari, reacted to this new “tragic wave” of executions.

After spending seven years in prison in conditions that are unbearable for a young woman, her daughter Reyhaneh, aged 26, was hanged on October 25, 2014 under the law of retaliation (Qisas) for killing in self-defence an old employee of the Iranian Ministry of Intelligence who was trying to rape her.

Ms Pakravan is concerned about the negative impact of the revolting spectacle of public hangings on passers-by and in particular children, who watch with horror, the last gasps of the tortured.

To stage a crane hanging in public places across the country that this afflicted mother calls “planned and with a precise goal,” is one of the usual ways in which the Khomeinist regime tries to survive. Terrorizing an exasperated population and imposing a climate of constant violence in society, the mullahs are trying to save their fragile power, stopping at nothing to stay the absolute masters of the country.

The regime’s police force is often forced to crisscross neighbourhoods where executions are carried out, for fear of protests being carried out by passers in solidarity with the families of those executed.

The mother of Reyhaneh rightly points out that Iran had not been exposed to such atrocities since the invasion of the Mongols … the twelfth century.

On the eve of the official visit to Paris to justify the 2000 killings of his mandate by “simply practicing the divine laws”, Hassan Rouhani, the “moderate” president, is obviously coming to talk business by displaying the hypocritical side of the mullahs. It would be a shame for the media to persist with their deafening silence on what is really happening in Iran on a daily basis.

The Times: Iranian banks will be given the cold...