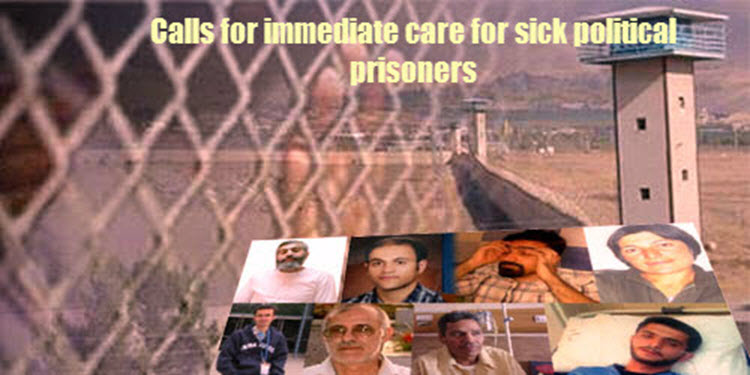 London, 9 May – The Secretariat of the National Council of Resistance of Iran (NCRI) has issued a statement calling for the support of international human rights organisations in freeing several severely ill political prisoners.

Depriving prisoners of adequate medical care is a tactic intended to break the morale and spirit of political prisoners in Iran, the NCRI said. The political prisoners specifically mentioned in the statement range in age from 26 to 73, are both male and female and have a host of serious conditions.

Alireza Golipour, 30, has been denied treatment for lung cancer and suffers severe and continuous nose bleeds. Alireza was arrested during the 2009 pro-democracy protests and then again in October 2012. He has spent months in solitary confinement and been placed in the general population of Evin Prison- exposing him to the government’s “mafia-style gangs” inside.

Ali Moezzi, 66, suffers from bladder carcinoma as well as prostate and renal issues. Ali has been an activist since the 1980s and was most recently imprisoned for visiting his children in Camp Ashraf- a refugee camp in Iraq most holding members of Iranian opposition group the People’s Mujahedin of Iran (PMOI/MEK).

Abdolfattah Soltani, 63, is a lawyer who is suffering from digestive issues and cardiovascular problems in addition to unstable blood pressure. These conditions are contributing to unusual weight loss. Abdolfattah was arrested in the 2009 protests and is serving 10 years for “propaganda against the system”. Abdolfattah’s work with imprisoned workers, students and journalists makes him a crucial target for Iran’s government.

Zainab Jalalian, 44, is a Kurdish political prisoner who is on the verge of losing her eyesight. Zainab’s release to a hospital for treatment has come under the brutish condition of holding a young member of her family hostage. Zainab was arrested in March 2008 and has been charged with Moharebeh- emnity against God- and is serving a life sentence.

Mohsin Daneshpour Moghaddam, the oldest of those mentioned at 73, is on death row for his contacts with the PMOI/MEK. He was arrested with his wife, son and daughter-in-law on 27 December 2009. He has vasoconstriction, cardiac disease, and arthritis in his knees which are all exacerbated by the “medieval prison conditions” he has been subject to.

Massoud Arab Choubdar was arrested in 2013 and is serving a three year sentence. It appears however that he has been subject to torture and denial of treatment. Massoud was in the prison infirmary but has been released back into the general population. To protest this he is taking part in a hunger strike.

There are numerous United Nations groups closely following developments in Iran. The NCRI has called on the following to take action:

Since 1979 over 120,000 political prisoners have been executed and hundreds of thousands more imprisoned. In recent years, according to UN figures, the number of executions has increased, despite the claims by some in the West and Iran that President Hassan Rouhani represented a step towards more moderate policy.