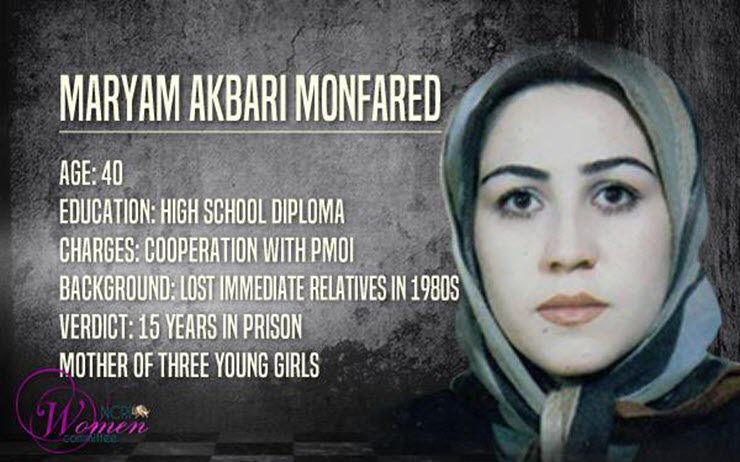 London, 15 Nov – All across Iran, the families of victims of the 1988 Iranian Massacre have issued statements in support of the political prisoner Maryam Akbari Monfared and called for her release.

Monfared recently filed a lawsuit with the Iranian regime in order to get justice for her family members who were also killed during the massacre. She wants the deaths of her brother and sister investigated and wants to know where they have been buried.

In Mashhad, the victims’ families declared that they stand in support of Monfared’s lawsuit.

The families from Shahrekord wrote that they admired Monfared’s determination, despite her incarceration. They called on “all international human rights organizations to protest restrictions imposed on her and other political prisoners and demand their unconditional release”.

The Tabriz families also demanded Monfared’s unconditional release and stated that they supported her quest for justice.

They wrote: “The political prisoner, Maryam Akbari Monfared, who (by filing an official complaint) demanded trial of the murderers of her brothers and sister during the massacre of political prisoners in 1988 in Iran, is now facing the wrath of Iranian regime authorities such that she is now denied any medical treatment (and family visit). We call on all international organs and human rights bodies to press the Iranian regime for her immediate release.”

The 1988 Massacre mainly targeted members or supporters of the People’s Mojahedin Organization of Iran (MEK/PMOI); some were already serving prison sentences, some had finished and some were just relatives of the prisoners.

Over 30,000 people were murdered by the regime on the basis of a fatwa handed down by Iran’s then-Supreme Leader Ayatollah Ruhollah Khomeini, and those responsible have not been brought to justice; in fact, almost 60 of them are still in power.

Iranian dissidents have been pointing out that as it is clear that Iran will not police itself, the United Nations ought to investigate the massacre and bring those responsible to trial at the International Criminal Court.

The Guardian - Leader: Mahmoud Ahmadinejad himself was the...

Reuters: Iran has approved the commercial viability of natural...