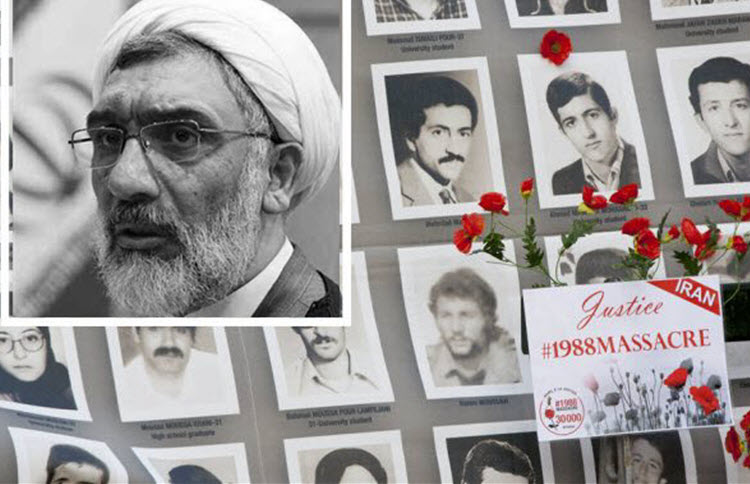 Iran’s former justice minister has defended the 1988 massacre of 30,000 political prisoners in the media recently.

Mostafa Pourmohammadi, who served in the cabinet of President Hassan Rouhani until 2017, told state-run Mosalas Magazine that the regime was “at war” and should not be expected to follow “legal procedures and consider citizen’s and human rights”.

He then described the People’s Mojahedin Organization of Iran (PMOI or MEK), whose members and supporters were the main victims of the massacre, as “the worst kind of enemy”.

He said: “They have destructed our image in the whole world. In the past 40 years, nothing has happened against us that the [MEK] did not play a direct role in.”

Pourmohammadi, who is now Advisor to Iran’s Judiciary Chief, was in 1988 a member of the notorious “Death Commission” in Tehran, which sent thousands of political prisoners, many of whom were already serving or had completed their sentences, to their deaths after show trials that only asked for their political affiliation. All of this happened between August and September 1988 based on Ruhollah Khomeini’s fatwa.

In a separate interview, he said: “We had a mission in regards to the [MEK], back when I was the Revolutionary Court prosecutor. I issued many indictments against the [MEK] and sent it to the court. Many of them were condemned, many were executed and many other verdicts.”

Of course, this is not a new revelation. Pourmohammadi has acknowledged his crimes relating to the 1988 massacre on many occasions, once even saying he was “proud”.

He also spoke to Iranian state TV on Friday that the publication of remarks made in 1988 by then-second-in-command Grand Ayatollah Hossein Ali Montazeri, criticizing the regime’s genocide and called the publication on the audiotape “an act of treason” and “a betrayal to the revolution”.

Pourmohammadi said that discussing the matter would play into the “enemy’s hands”, but still noted that he defended Khomeini’s move to sack Montazeri over his remarks.

He said: “When people make stupid decisions, seeking to take revenge, they become blind, and can no longer determine what is right or wrong.”

It is not clear here whether he is refereeing to Montazeri or his son Ahmed, who published the tape. Later, Pourmohammadi refers to Ahmed as an “unwise insider” who released the tape for “unknown reason”.

He also seemed unclear about whether or not he does or should play into the “enemy’s hands”, as evidenced by this quote.

He said: “Some of the men and others, and reporters, have sought to ask me questions. I have answered that I do not play into the enemy’s hands… There’s no reason that we should be deceived by the enemy’s plans. We should play into their hands. We have much to say and we will say so when the time comes.”

Iran’s chief nuclear negotiator to head to China on Thursday