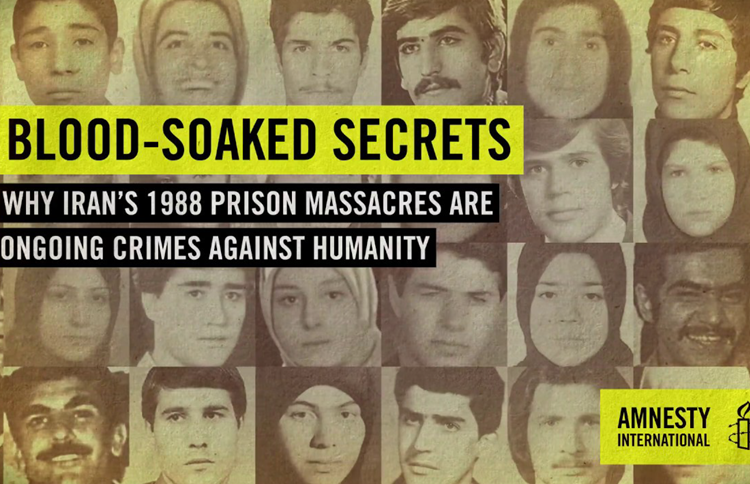 As we approach the International Day of the Victims of Enforced Disappearances (August 30), Amnesty International said that the Iranian authorities’ continued failure to disclose the fate of thousands of political dissidents, forcibly disappeared and extrajudicially executed in the secret 1988 prison massacres, is a crisis that has been ignored by the international community for decades.

Across the country, thousands of the victims’ deaths remain unregistered and their bodies buried in unidentified mass graves. Iranian authorities have caused untold pain to the victims’ loved ones by refusing to officially acknowledge the mass graves and their locations over the past 30 years.

Philip Luther, the Middle East and North Africa Research and Advocacy Director at Amnesty International, said: “The families of those secretly killed in the 1988 prison massacres are still living through a nightmare. They and many others in Iran are haunted by the thousands of missing bodies, which have cast a spectre over the country’s justice system to this day.”

He continued: “It is misguided to view the 1988 mass killings as historical events. The enforced disappearances are ongoing and, 30 years later, victims’ families continue to be tormented by anguish and uncertainty over the fate of their loved ones.”

Amnesty had already concluded in their December 2018 “Blood-soaked secrets” report that the Iranian authorities were committing ongoing crimes against humanity by concealing the fate of the victims, denying the mass graves, and even trying to destroy the mass graves to conceal evidence.

Even those families who were told where their relatives were buried believe that they were duped, thinking now that the government revealed a small number of fake graves to disguise how many people were really killed.

Now, Amnesty says that Iranian authorities have the obligation to investigate these ongoing crimes and “provide victims with truth, justice, and reparations”. This would include having independent experts exhume and identify the remains, before returning the remains to their families for burial. Of course, Tehran will not do this without intense pressure, which is why Amnesty called on the UN.

Luther said: “UN member states must use every opportunity, including the upcoming review of Iran’s human rights record at the UN Human Rights Council in November, to press the Iranian government to identify mass graves and reveal the fate and whereabouts of all victims of these tragic events.”

Amnesty called on the UN to establish an independent investigation into the massacre to find out the truth, which would allow those responsible to be prosecuted and survivors and families of victims to receive reparations.

The vast majority of the victims of the 1988 massacre were members and supporters of the main opposition group People’s Mojahedin Organization of Iran (PMOI), otherwise known as the Mujahedeen e Khalq (MEK).

Fun with geopolitics: The forces behind the new treaty with Iran

UNF Spinnaker: In short, this treaty is about more than...