AP: Iran is throwing its weight behind Iraqi Prime Minister Nouri al-Maliki’s bid for a second term, political insiders say, an endorsement that could seal his hold on power.

By QASSIM ABDUL-ZAHRA and MARJORIE OLSTER 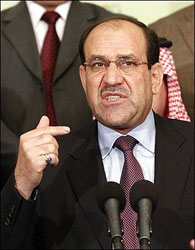 BAGHDAD (AP) — Iran is throwing its weight behind Iraqi Prime Minister Nouri al-Maliki’s bid for a second term, political insiders say, an endorsement that could seal his hold on power.

Tehran wields considerable influence over Iraq’s two largest Shiite blocs, which formed an alliance this month after coming in second and third in the March 7 parliamentary election. That alliance has virtually ensured they will form another Shiite-dominated government — even though a Sunni-backed party won the most seats.

The U.S. is concerned about Iranian attempts to influence Iraq’s political process, a State Department spokesman said Friday. He reiterated Washington’s call not to exclude minority Sunnis from government — something many in Iraq fear could inflame sectarian tensions anew.

Shiite coalitions have ruled Iraq since the end of Saddam Hussein’s regime but were pressured by the U.S. into accommodating the Sunnis. Sunni anger over being largely excluded from government fueled sectarian violence that brought Iraq to the brink of civil war several years ago. The U.S. will no longer have such leverage as its military role fades.

After a seven-year war and nearly 4,400 American military deaths, a government based on the Shiite alliance could give neighboring Iran the upper hand in Iraq just as the U.S. prepares to pull its remaining combat troops out by the end of August.

Although al-Maliki had close ties with former President George W. Bush and is believed to dislike the Iranians, he may become beholden to Tehran if he wants to hold on to power in a second term.

It is widely believed that Iran, a Shiite country, played a role in pushing through the deal linking al-Maliki’s State of Law with the more conservative and religious Iraqi National Alliance (INA), dominated by supporters of powerful cleric Muqtada al-Sadr, who lives in Iran.

The Sadrists dislike al-Maliki intensely because he crushed their Mahdi Army militia in 2008 and jailed thousands of them. They initially rejected him as head of the new government.

Politicians involved in negotiations say Iran is now urging the Sadrists to back al-Maliki and that the Sadrists are softening.

“Iran has been trying to persuade the Sadrists to let al-Maliki be the prime minister,” said one alliance politician knowledgeable about the negotiations. An INA official confirmed this. Both spoke on condition of anonymity because of the sensitivity of the issue.

Iraqiya’s surprisingly strong showing — 91 of 325 seats to 89 for al-Maliki’s bloc — was initially seen as an opening for neighboring Sunni Arab countries, particularly Saudi Arabia, to curtail Iranian influence in Iraq. Allawi still insists he should get the first crack at forming the government.

But Iran saw Allawi as the “American” candidate and an ally of Saudi Arabia, its regional rival. Allawi is a Shiite, but Iraqiya was backed by both Shiites and Sunnis and had a secular, nationalist character. Allawi wants to move Iraq away from Iran and rebuild relations with other Arab states.

With the Americans departing and the Iraqis struggling to form a stable government, this country is increasingly becoming another front in the power struggle between Iran and the Sunni Arab powers — a competition which reverberates throughout the Middle East, from Lebanon to the Palestinian territories to Yemen.

Kazim al-Muqdadi, a political analyst at Baghdad University, said the weakness of Iraq’s government made it vulnerable to interference from foreign countries, most importantly Iran.

“On the other hand, Saudi Arabia is interfering to counter the Iranian influence by supporting Iraqiya list,” he said. “Iran’s top concern is to preserve its interests and to increase its influence everywhere, and it is ready to support any group that meets these goals,” he added.

“Iran’s interference in Iraq is not covert and Iranian officials prefer al-Maliki to Allawi. They think that al-Maliki is closer to their agenda than Allawi, who has a program that is mostly contrary to Iran’s aspirations.”

Iran’s clout was perhaps most apparent in the days immediately after the election, when politicians from all major blocs rushed to Tehran for consultations. Allawi sent emissaries but did not go himself. Instead, he went to Saudi Arabia, Jordan and Turkey.

When al-Maliki sealed the deal with INA, it put the alliance just four seats short of a majority coalition and gave Iran new leverage.

That is something the United States and its Arab allies in the Middle East have worried about since 2003, even though they knew it was virtually inevitable. The U.S. has warned repeatedly about Iranian meddling in Iraq.

“We are concerned about attempts by Iran to influence events in Iraq, but we are completely confident that a future Iraqi government is going to pursue its interests and not the interests of Iran,” State Department spokesman P.J. Crowley said in Washington on Friday.

Though 2 1/2 months have passed since the election, progress toward a new government has been slow. The process could still drag on for months and hold more surprises.

Al-Maliki has issued a series of challenges to the results, most notably a demand for a re-count, which didn’t change the outcome.

All this has delayed certification of the final tally, a major obstacle to formation of a government. But the delays bought al-Maliki time to form the Shiite alliance and undercut Allawi.

A member of the Saudi royal family and the country’s former intelligence chief, Turki al-Faisal, accused al-Maliki of trying to “hijack” the election and deny the Iraqi people their legitimately elected government.

Clearly there are limits to Iran’s power in Iraq — it pushed for the Shiite alliance before the elections and didn’t get it.

INA could still try to put forward one of its own or lobby for a different candidate from al-Maliki’s bloc for prime minister. But many of the possible alternatives face opposition from minority Sunnis and the Kurds.

All agree Sadrist support for al-Maliki would come with the highest price they can exact.

They will likely demand the release of about 2,000 Sadrist prisoners from the disbanded militia, the influential post of deputy parliament speaker, and a minister to head one of the four most important offices: Foreign, Interior, Oil or Finance.

“We have no objection to the nomination of al-Maliki, but we still have some reservations about him.”

In a sign of the Sadrists’ newfound political clout, militiamen that al-Maliki’s government drove from the streets two years ago have begun reappearing in Baghdad’s Sadr City district over the past month. As before, they are wearing black.

Associated Press reporters Rebecca Santana and Sameer Yacoub in Baghdad and Robert Burns in Washington contributed to this report.

Will Trump Fix Obama Policy on the Middle East?

AFP: Iran said on Saturday it has resumed supplying...