UN warns of dangers posed to Iranian dissidents in Iraq

Iran Focus: London, May 29 – As Iraqi politicians struggle to form a new government, the fate of 3,400 members of the main Iranian opposition group, the People’s Mojahedin Organisation of Iran (PMOI), has been hanging in the balance, with Iran demanding that authorities in Baghdad clamp down on the group. 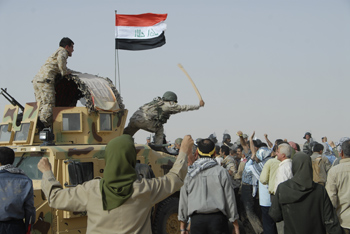 London, May 29 – As Iraqi politicians struggle to form a new government, the fate of 3,400 members of the main Iranian opposition group, the People’s Mojahedin Organisation of Iran (PMOI), has been hanging in the balance, with Iran demanding that authorities in Baghdad clamp down on the group.

The group, based in Camp Ashraf, northeast of Baghdad, has come under increasing pressures and clampdown by Prime Minister Nuri al-Maliki’s government.

But in recently released reports, international human rights groups and senior United Nations officials chastised the Iraqi government for its crackdown on the group last year and not responding to the repeated inquiries about the treatment of the Ashraf residents.

“The 36 were taken to al-Khalis police station in Diyala, where they mounted a hunger strike, and were then moved to Baghdad despite repeated judicial orders for their release. They were freed and allowed to return to Camp Ashraf in October after an international campaign”, the report said.

Anand Grover, the Special Rapporteur on the right of everyone to the enjoyment of the highest attainable standard of physical and mental health, in a report to the UN Human Rights Council on 19 May, gave further details of the attack: “It was reported that some of the dead were killed intentionally, having been struck by a single bullet to the head or chest. … When the Iraqi security forces tried to enter the camp, they clashed with hundreds of unarmed residents, who had formed a human chain. They subsequently clashed with camp residents within the camp. The Iraqi security forces made use of different means in order to disperse the crowd, including water canons, batons, batons with nails, metal rods, cricket bats, chains, sickles, axes, teargas and sound grenades”.

The report said that on 1 October 2009, Mr. Grover, together with the Special Rapporteur on extrajudicial, summary or arbitrary executions and the Special Rapporteur on torture and other cruel, inhuman or degrading treatment or punishment sent a joint urgent appeal to the Government of Iraq to call attention to information received regarding the alleged excessive use of force by Iraqi security forces during the operation on 28 and 29 July in Camp Ashraf.

Mr. Grover said he “regrets” that at the time of the finalisation of the report, Iraq had not transmitted any reply to his communication.

The PMOI asserts that Iran has made its support for Mr. Al-Maliki, who seeks a second term as Prime Minister, conditional upon Iraq disbanding Ashraf.

Lawyers representing the Iranian opposition members in Ashraf welcomed the UN report. In a telephone interview with Iran Focus, Steven Schneebaum, who represents the US families of Ashraf residents, and who earlier this week presented a detailed legal opinion on the subject, said: “The Fourth Geneva Convention imposes requirements on the United States to ensure the that the rights of Ashraf residents are protected, since it was the United States that transferred control of these internationally protected persons to another state.”

Mr. Schneebaum, an adjunct professor of law at the School of Advanced International Studies at Johns Hopkins University in Washington DC, added: “Yet the existence of U.S. obligations does not relieve the United Nations of its own duties toward the People of Ashraf.  Their rights guaranteed under international human rights law and international humanitarian law must be respected.  In this regard, the United Nations Assistance Mission for Iraq (UNAMI) must play this critical and life-saving role of confirming the legal status of the People of Ashraf, preventing their repatriation or forced relocation within Iraq, and lifting the restrictions placed upon them by the Iraqi Government in violation of international legal norms.”

UPI: The world's only "nuclear criminal" is the United...