Reuters: Iraq’s new parliament will meet on Tuesday for just the second time since a March 7 parliamentary election that produced no clear winner, a representative of a political bloc said on Sunday. 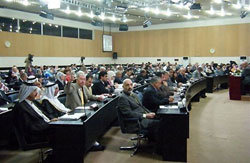 BAGHDAD (Reuters) – Iraq’s new parliament will meet on Tuesday for just the second time since a March 7 parliamentary election that produced no clear winner, a representative of a political bloc said on Sunday.

But the decision to schedule a new session, made at a meeting of the political factions, did not signal a deal between squabbling coalitions on the formation of a new government, said Salim al-Jubouri, an official with the Tawafuq bloc.

The new session was intended to pick a new parliamentary speaker and two deputies, a necessary step in the process of forming a new government.

“In the absence of a political accord between the blocs in parliament … the solution is to vote (for a new speaker and deputies),” Jubouri said.

“The representatives of the blocs agreed to hold the session on Tuesday at 10 o’clock,” he said.

Iraq’s Shi’ite, Sunni and Kurdish factions have been jockeying for position in the new government since an inconclusive parliamentary election four months ago that Iraqis had hoped would bring stable government after years of war.

U.S. troops are due to pull out by the end of next year.

The negotiations have snagged on the issue of who would hold the prime minister’s office. Shi’ite incumbent Nuri al-Maliki, whose State of Law bloc placed second in the election, wants another term.

State of Law and Iraqiya objected to calling a new session of parliament for Tuesday and were likely to be absent, meaning there would not be enough members present for a quorum, several lawmakers said.

Together the two blocs hold 180 of parliament’s 325 seats.

The new parliament met for the first time on June 14 in a session that lasted barely 20 minutes. The session was left open and lawmakers have not reconvened since.

AFP: Russia has delivered a second consignment of nuclear...