AFP: The secular coalition that narrowly won Iraq’s general election is edging closer to power after a bitter row over who becomes prime minister left a rival Shiite alliance on the brink of collapse. 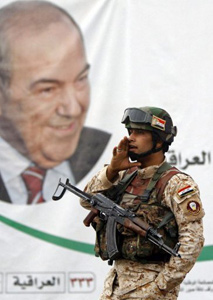 BAGHDAD (AFP) — The secular coalition that narrowly won Iraq’s general election is edging closer to power after a bitter row over who becomes prime minister left a rival Shiite alliance on the brink of collapse.

Iyad Allawi, the Shiite former premier whose Iraqiya bloc triumphed in the poll five months ago due to strong backing in Sunni areas, has since been stymied by concerted efforts from adversaries to stop him retaking office.

With no single party winning a parliamentary majority, a Shiite “super-bloc” was formed between the second and third-placed parties in the vote to try to supplant Allawi, who has said neighbouring Iran also wants to sideline him.

But in what could yet amount to a dramatic reversal of fortune for Allawi, his main rival for the premiership, incumbent Prime Minister Nuri al-Maliki, has lost the backing of smaller Shiite parties who now want him to stand down.

Under the Iraqi constitution, the leader of the largest single bloc when parliament opens is given the first shot at forming a government.

Allawi’s hopes were dented in May, however, by the formation of the Shiite super-bloc, named the National Alliance, between the State of Law and the Iraqi National Alliance (INA) which finished third in the poll.

With 159 seats in total it was only four short of a parliamentary majority but Maliki’s refusal to step aside is angering the INA, in which radical anti-US cleric Moqtada Sadr’s party forms the largest faction.

“The disputes within the National Alliance will certainly help Iraqiya,” Ameer al-Saidi, an independent political analyst in Baghdad, told AFP.

“Unfortunately, we are still living with political sectarianism, masked by the National Alliance,” whose now boiling divisions have exposed its latent attempts to keep Allawi out of power, he said.

With Maliki’s support crumbling and Allawi still well short of the 163 seats needed for a majority in the 325-seat parliament, new alliances are needed amid dangerously high levels of violence that threaten to destabilise the country.

“There is Iranian pressure on the national coalition to make concessions (between the two lists) to form the government with a Shiite majority and a Shiite president,” said Saidi.

“The deal between State of Law and the INA was supported by foreign states to get a majority in the parliament, but the negotiations between them led to disputes.”

The INA is adamant Maliki should not serve a second term as prime minister but State of Law has refused to put forward any other candidate, a move that could lead the INA into a new round of bargaining with Allawi.

“The coalition between State of Law and the INA was nothing more than a name and it was formed to block Iraqiya,” Hussein al-Shalan, a senior member of Allawi’s list, told AFP.

“The dispute is proof to everyone that there is no real coalition.”

Alya Nsaiyef, another member of the same list, said the row would “serve Iraqiya’s interests, although we are not building any hope on these disputes” because of “foreign intervention” in efforts to form a new government.

However, “the new situation gives each party the chance to negotiate individually,” she added.

In an interview on state television broadcast on Sunday, Maliki said his opponents wanted him to step down so that “Iraq’s unity, sovereignty and constitution” would suffer and “the warlords and militias return again.”

He also admitted that negotiations with the INA had ended “a long time ago” after reaching “a dead end.

On nuclear seesaw, the balance seems to shift to Iran