AFP: Iran’s new envoy to Baghdad said on Tuesday that the latest round of sanctions imposed on his country would not affect growing trade with Iraq which is now worth billions of dollars. 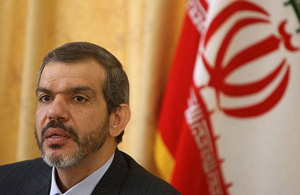 BAGHDAD (AFP) — Iran’s new envoy to Baghdad said on Tuesday that the latest round of sanctions imposed on his country would not affect growing trade with Iraq which is now worth billions of dollars.

Hassan Danaie-Far’s remarks to reporters came during his first news conference since arriving in the Iraqi capital to replace former ambassador Hassan Kadhami-Qomi.

“The sanctions will not affect economic relations between the two countries,” Danaie-Far said at the Iranian embassy in central Baghdad.

“Economic relations (between Iraq and Iran) are on a natural path, despite having stopped for several decades,” Danaie-Far said. “They are improving now, day by day.”

The UN Security Council hit Iran with a fourth set of sanctions on June 9 over its nuclear programme. The United States and European Union have since imposed even tougher punitive measures of their own which contain provisions to penalise Tehran’s trading partners.

The Iranian ambassador said bilateral trade with Iraq currently amounted to about seven billion dollars a year, adding: “This figure will increase in the near future.”

However he side-stepped questions about the alleged smuggling of crude oil derivatives to Iranian territory from northern Iraq which has alarmed US officials in Baghdad.

“We consider it as an Iraqi domestic issue,” said Danaie-Far.

“We have nothing to do with it. There are lots of goods that come and go to and from our borders to other countries, we do not intervene in this issue. The Iraqi officials must stop the cargo,” if smuggling is expected, he added.

Under now-executed dictator Saddam Hussein’s regime, Tehran and Baghdad fought a devastating war from 1980 to 1988 in which about one million people were killed.

Relations between the two neighbours have warmed considerably since Saddam was overthrown in 2003 when US-led forces invaded the country, although many of Iraq’s Sunni Arabs continue to eye Iran with suspicion.

Danaie-Far, however, denied that Tehran was meddling to the detriment of Iraqi politics, more than five months after an inconclusive parliamentary election that has left the war-wracked country without a new government.

“We support an Iraqi government elected by the Iraqi people that respects the constitution and all the parties,” he said.

“We are making efforts to support the political process and the stability in this country, and we do not intervene in its internal issues.”