AP: A U.S. Army contractor kidnapped in Iraq earlier this year described how his captors easily maneuvered past Iraqi checkpoints as he was held bleeding on the floor of their car. 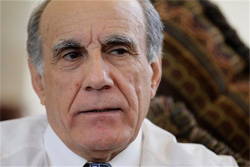 SAN DIEGO (AP) — A U.S. Army contractor kidnapped in Iraq earlier this year described how his captors easily maneuvered past Iraqi checkpoints as he was held bleeding on the floor of their car.

In his first media interview since he was freed safely in March, Issa Salomi told The Associated Press he was handed over in exchange for four militants in Iraqi detention.

Shiite extremist group Asaib Ahl al-Haq, or “the League of the Righteous,” claimed responsibility for his kidnapping. The group is believed to be close with Iran, and agreed last year to lay down its arms and join the Iraqi political process. Their current role is unclear.

“You can say they are the Hezbollah of Iraq,” said Salomi, referring to Lebanon’s militant group. “I don’t believe Americans, particularly decision-makers, know the depths of the currents taking shape in Iraq. After spending two months talking with them, reading their material, I know them better than anybody. Their influence is very strong, and I suspect it will grow.”

The Pentagon has given no details about Salomi’s disappearance Jan. 23 or his surprise return March 25.

After his release, Army officials questioned the 60-year-old resident of San Diego for weeks about his experience and the group.

The same group reportedly kidnapped British computer consultant Peter Moore in May 2007 along with his four British bodyguards.

Moore, who was working for a U.S. company, was handed over to Iraqi authorities in late December at the same time that the group’s head, Qais al-Khazali, was transferred from U.S. to Iraqi government custody. Three of Moore’s bodyguards were killed and the fourth is believed dead.

Salomi watched the video of Moore during his captivity and believes they were held in the same room.

He said he was gathering information on the country’s upcoming elections for the U.S. Army.

He declined to specify where he was in Baghdad at the time of his kidnapping. An Iraqi defense official said shortly after his abduction that the U.S. citizen — who grew up in Baghdad and was the son of the Iraqi monarchy’s photographer — was lured off a U.S. military base by militiamen who promised to help find his distant relatives.

Salomi said a stocky man pulled him from his car and head butted him in the face. With the blood gushing from the wound under his eye, Salomi tried to put his feet on the outside of the door to prevent his captors from forcing him into their car. One hit him on the head with the butt of his gun before shoving him onto the car floor.

They kept him there face-down, pressing their boots on his neck.

As they drove through a military checkpoint and stopped briefly to greet the Iraqi soldiers, Salomi realized he might die.

“I expected at any checkpoint they would discover me, so this was a great disappointment when they went through so easily,” said the slender, gray-haired man. “They knew these people.”

About a half-hour later, they stopped and pulled him out, kicking and hitting him. He was taken into a dark house, stripped naked, and thrown onto the cold tile floor. After being gagged and bound, he was moved to another house, where his treatment changed. The men guarding him cleaned his wounds, bandaged them, clothed him, and gave him a pain killer.

“I was very grateful,” Salomi said. “I thought, ‘I’m still alive.’ I took the pain killer he gave me, and I just slept.”

During his captivity, Salomi said he was fed kebabs and homemade pita bread. The guards would talk freely with him about their families and their beliefs, but they would not say why he was being held or whether he would be released.

Then a man came and told him: “The whole world is asking about you — the U.S. Embassy, the U.S. Army. You must be a very important person.”

He asked for $1 million and Salomi told him that was impossible. They asked for the names of other Americans to kidnap. He said he refused.

He was moved to another house. The guards there gave him books to read about their organization.

They discussed their religious beliefs, sports, TV programs and love lives. They asked his opinion of President Obama’s plans for troops to withdraw and former President Bush’s invasion of Iraq. Salomi said he told them Iraqis were better off because Saddam Hussein was overthrown.

One day, they brought in a U.S. Army uniform for him to put on and told him to sit in a chair. A black curtain with the organization’s name in Arabic was hung behind him.

They asked him to state the group’s demands: They wanted their militants released from jail, foreign troops withdrawn from Iraq and Blackwater security officials to be prosecuted. The footage was aired worldwide.

They showed him news clips about how his hostage takers were ready to negotiate but then he heard they were stalling. Salomi became petrified of never being released.

“It was like a big bubble of sadness overcame me, and I started to cry and cry,” he said, adding that he drew on his Christian faith for strength. “I couldn’t breathe anymore, but I couldn’t stop.”

Ten more days passed before he was loaded into a car at 4:30 a.m. and forced to lie down on the floor.

When he was pulled out of the car, he was met by an Iraqi government official who told him “congratulations” and informed him that he had been freed.

Salomi has been recovering with his family at his suburban San Diego home, decorated with ornate furniture and a 400-old drawing of the Virgin Mary on deerskin. A plastic banner hangs on his living room wall that reads: “Welcome Home.”

Salomi said he is grateful to U.S. officials who helped get him released. But his homecoming has been bittersweet.

He remains a U.S. Army employee for now. But the father of six who worked as a transportation engineer for the Iraqi government for 15 years said he will be out of a job when his leave of absence period ends in two weeks. The Defense Department is drastically reducing government contractors. He has worked for the U.S. Army since 2007.

“Although I was received like a hero when I was released, it is sort of like now I feel like I’m being left out, and it feels really painful in my heart,” he said. “I need to do something to engage my mind or I’m going to go crazy. I would very much like to be a bridge between Iraq and the US.”

Reuters: Iranian police will deal firmly with any illegal...