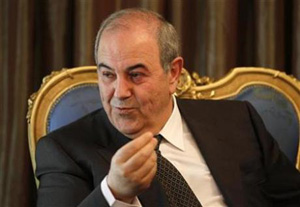 Five months of talks between Iraqiya and Maliki’s Shi’ite-led State of Law alliance since the inconclusive March 7 vote had always been tentative and it was not clear how significant the decision by Allawi’s alliance might prove to be.

But the political impasse has stirred tensions as U.S. troops prepare to end combat operations this month, ahead of a full withdrawal next year, and raised the spectre of a return to widespread violence just as the bloodshed has begun to recede.

A spokeswoman for Iraqiya, Maysoon al-Damluji, said the bloc stopped negotiations with Maliki’s State of Law after he described Allawi’s group as Sunni, rather than cross-sectarian.

“We demand that he apologises, not to Iraqiya but to the supporters of Iraqiya who voted for a national project and not a sectarian one,” Damluji said.

Intisar Allawi, a senior Iraqiya official, said more than 26 of its 91 elected lawmakers were Shi’ite, as was Iyad Allawi himself.

“So why does he call us a Sunni bloc? This is an insult,” she said.

Iraqis had hoped the March 7 ballot would lead to greater stability and prosperity seven years after the U.S.-led invasion ousted Saddam Hussein and triggered widespread bloodshed between majority Shi’ites and once dominant Sunnis.

Instead the resulting political uncertainty has been accompanied by persistent attacks and cast doubt on Iraq’s ability to attract the foreign investment it needs to rebuild after decades of war, sanctions and economic decline.

The number of civilians killed in July almost doubled to 396 from 204 the month before, according to government figures, as armed groups tested the mettle of Iraqi security forces ahead of a formal end to U.S. combat operations at the end of August.

While neither won the majority needed to govern, Maliki’s State of Law won two seats fewer than Iraqiya in the 325-seat parliament. Iraqiya won broad backing from Sunnis who saw Allawi as a secular strongman willing to defend their cause and to stand up against Shi’ite power Iran.

State of Law merged after the election with Iraq’s other main Shi’ite-led faction, the Iraqi National Alliance (INA), to become the biggest group in the new parliament.

But Maliki’s desire to serve a second term has been fiercely opposed by some of his Shi’ite partners. That led him to start negotiations with Allawi.

The decision to end the talks could propel Maliki back into the arms of the INA, but it could also energise negotiations between Iraqiya and the INA’s main elements, in particular the Iran-friendly Supreme Islamic Iraqi Council (ISCI).

It was also likely to mean that establishing a new government will take even longer than many had hoped.

The United States, eager to stick to President Barack Obama’s schedule to end combat operations and cut troop numbers to 50,000 at the end of the month, has recently been urging Maliki and Allawi to cut a deal.

AFP: President Mahmoud Ahmadinejad is heading to China this...

Reuters: The U.S. Commerce Department on Monday issued a...