Wall Street Journal: At least 55 people were killed in about two dozen bombings and shootings, most of them targeting police, across Iraq on Wednesday, a day after the U.S. said it had met an end-of-month deadline for the withdrawal of combat forces. 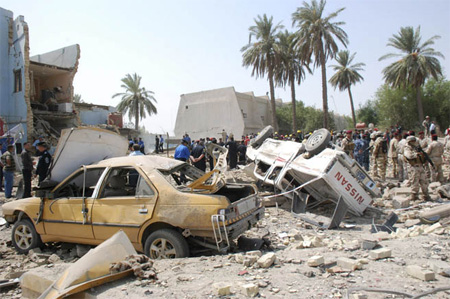 BAGHDAD—At least 55 people were killed in about two dozen bombings and shootings, most of them targeting police, across Iraq on Wednesday, a day after the U.S. said it had met an end-of-month deadline for the withdrawal of combat forces.

The attacks, the latest in a series of high-profile and seemingly coordinated bombings and targeted shootings, have shaken confidence in Iraq’s security forces as they prepare to take over from the U.S., which officially ends its combat mission here on Aug. 31.

Wednesday’s carnage wasn’t any more horrific than a handful of single-day attacks that have hit the capital and the rest of Iraq for more than a year. But it resonated among Iraqis as a clear warning to the American-backed government and security forces to expect more bloodshed.

The Obama administration has said remaining American troops will still be ready to fight when necessary. But Washington also has repeatedly said the end-of-month deadline underscores its belief that Iraqi commanders are ready to take over responsibility for the country’s security. A bilateral agreement between Washington and Baghdad calls for the withdrawal of all U.S. troops by the end of next year.

“The ISF took a blow, but they are not on the ropes and will meet these challenges head on,” said Maj. Gen. Stephen Lanza, spokesman for the U.S. Forces-Iraq.

President Barack Obama will address Americans from the Oval Office and visit troops at Fort Bliss, Texas, on Tuesday to mark the end of U.S. combat operations in Iraq.

U.S. commanders and the caretaker government of Prime Minister Nouri al-Maliki repeatedly have blamed the attacks on a hodge-podge of insurgent groups, including extremist groups linked to al Qaeda and, separately, to Iran. They allege the groups are trying to take advantage of a political vacuum—politicians have yet to form a government after March polls—and sow fear amid the U.S. withdrawal.

“What the people need first and foremost is for the government to form now,” said Maj. Gen. Lanza

Iraqi and U.S. officials say security is still much better than the worst of the sectarian violence that flared in the years following the 2003 U.S.-led invasion. The gains are clear, with Baghdad returning to some semblance of routine city life over the past two years.

But insurgents have obscured those gains with a series of high-profile attacks that started in the summer of 2009 and have struck Baghdad and other cities ever since—at times killing more than 100 people in a single day. The targets often have been symbols of the state: government buildings, army installations and police officers, including traffic police.

On Wednesday, almost all of the 18 incidents appeared to target police. Car bombs and roadside bombs exploded in crowded downtown areas of Baghdad, in major cities stretching south to the oil capital Basra and north toward insurgent-heavy strongholds of Mosul, Baquba and Fallujah, security officials said.

In addition to the scores of dead Wednesday, the bombings injured at least 253 people. There was no immediate claim of responsibility for any of the attacks.

In one of the bloodiest attacks, 20 people were killed and 80 injured in Kut, 100 miles southeast of Baghdad, by a car bomb targeting a police station, according to an official at the Interior Ministry.

Earlier in the morning in Baghdad’s busy Cairo neighborhood, security officials say that a car bomb detonated near a police station during rush-hour traffic, killing at least 15 and injuring 57.

Amid the security disarray, Iraqis also are suffering through daily power outages and long gas-station lines, inconveniences that have plagued postinvasion Iraq. Protests over the lack of power have turned to fresh violence, including isolated riots this summer amid sweltering temperatures.

Security officials in southern Missan and Dhi Qar provinces, neither of which suffered attacks on Wednesday, have announced locally mandated states of emergency, reflecting a lack of confidence in the federal government to provide services and keep a lid on violence.

“Now a security plan is being implemented in order to avoid any security breach, as well as to keep the main commercial streets closed to cars,” said Maj. Gen. Sabah al-Fatlawi, police chief of Dhi Qar province, where 37 people were arrested in electricity protests Saturday.

Iraqi officials braced for more attacks ahead of the Aug. 31 end to the U.S. combat mission. The head of Iraq’s oil police said on Sunday that Mr. Maliki held a meeting detailing intelligence that al Qaeda in Iraq, the local affiliate of the global terror group, will be targeting the country’s oil facilities.

AFP: US Secretary of State Hillary Clinton on Thursday...