New York Times: The departing commander of American forces in Iraq, Gen. Ray Odierno, said Sunday that a new Iraqi government could still be two months away and warned that a stalemate beyond that could create demands for a new election to break the deadlock, which has lasted since March. 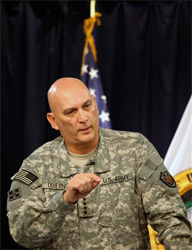 BAGHDAD — The departing commander of American forces in Iraq, Gen. Ray Odierno, said Sunday that a new Iraqi government could still be two months away and warned that a stalemate beyond that could create demands for a new election to break the deadlock, which has lasted since March.

While General Odierno said he believed negotiations had picked up and would prove successful, he predicted politicians still needed “four to six to eight weeks.”

“That’s a guess,” he said in an interview at his headquarters, whose plaster roof is still engraved with the initials of Saddam Hussein. “If it goes beyond 1 October, what does that mean? Could there be a call for another election? I worry about that a little bit.”

The prospect of another election would probably throw Iraq’s already turbulent politics into even greater turmoil as the United States begins withdrawing its last 50,000 troops, scheduled to be out by the end of 2011. While the election in March was viewed as successful, the periods before and after included bitter disputes over disqualifications, recounts, legal challenges and score-settling that exacerbated still smoldering sectarian tensions.

Even the suggestion of a new election underscored the ambiguity in an anxious and unsettled Iraq these days. President Obama plans a speech from the Oval Office on Tuesday to address what the administration describes as the end of combat operations here. But the date has largely gone unnoticed by Iraqis, whose frustration with the political deadlock has mirrored their deepening anger over a dysfunctional government and the shoddy delivery of the basic necessities of life.

American officials had hoped to have a new government in place long before the Tuesday deadline, set by the Obama administration, to bring troop levels down to 50,000. But an effort to form a coalition between the two winning blocs — one led by Prime Minister Nuri Kamal al-Maliki, the other by Ayad Allawi, a former interim prime minister — has proceeded only haltingly. Powerful groups within Iraq, and some of the country’s neighbors, remain deeply opposed to either man leading the country.

Even some Iraqi officials acknowledge there is little urgency in the talks, particularly during the Muslim holy month of Ramadan, which began this month. The prospect of an election, however remote, comes amid worries that insurgents might stage high-profile attacks to create havoc, that Iran has stepped up support for militant groups and that Iraqi military leaders might be tempted to take matters into their own hands.

General Odierno will leave the country Wednesday, after formally turning over command to Lt. Gen. Lloyd J. Austin III. For General Odierno, the ceremony will mark the end of more than four years in Iraq, where he has gone from a commander criticized for heavy-handed operations in regions that became insurgent strongholds to a figure praised, in military circles and beyond, for overseeing the American military buildup here in 2007.

But part of his legacy may rest on the performance of Iraq’s security forces in taking sole control of the country. American officials have conceded they were dealt a blow last week by a wave of car bombings, roadside mines and hit-and-run attacks that insurgents unleashed in at least 13 towns and cities across Iraq.

The attacks were “not unexpected,” General Odierno said. “What I would tell you surprised me a little bit was that they were able to do it over the country with some coordination.”

In his four years here, General Odierno was often at the center of shifting American military strategy in Iraq. He said the military learned lessons “the hard way.”

“We all came in very naïve about Iraq,” he said.

“We came in naïve about what the problems were in Iraq; I don’t think we understood what I call the societal devastation that occurred,” he said, citing the Iran-Iraq war, the Persian Gulf war and the international sanctions from 1990 to 2003 that wiped out the middle class. “And then we attacked to overthrow the government,” he said.

The same went for the country’s ethnic and sectarian divisions, he said: “We just didn’t understand it.”

To advocates of the counterinsurgency strategy that General Odierno has, in part, come to symbolize, the learning curve might highlight the military’s adaptiveness. Critics of a conflict that killed an estimated 100,000 Iraqis, perhaps far more, and more than 4,400 American soldiers might see the acknowledgment as evidence of the war’s folly.

Asked if the United States had made the country’s divisions worse, General Odierno said, “I don’t know.”

“There’s all these issues that we didn’t understand and that we had to work our way through,” he said. “And did maybe that cause it to get worse? Maybe.”

US pushes for ‘additional pressure’ on Iran