By BRIAN MURPHY and QASSIM ABDUL-ZAHRA 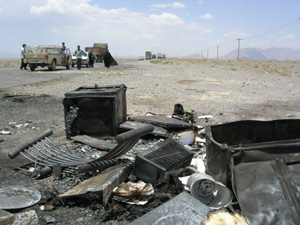 And digitally burned into the left-hand corner is the raised-rifle emblem of a Shiite militia linked to Iran.

To be sure, the immediate threats from Shiite militias are small compared with the recurring blows inflicted by suspected Sunni insurgents, such as car bombings last week in Baghdad that killed more than 30 people and a recent wave of targeted slayings. The worries, however, are more about how much Iran could be pulling the strings as it maneuvers to fill any vacuum left by the Americans.

Iran has been accused for years of aiding violent Shiite gangs — a charge Tehran denies. But U.S. and Iraqi authorities say a possible splintering of Shiite factions in Iraq could open even more channels for Iran to back proxy attacks and harassment of American forces and Sunni allies.

Such a scenario would further strengthen Iran’s hand, which already reaches into the political hierarchy through deep ties with major Shiite parties.

The map of Shiite militants has always been difficult to read — with a host of offshoots and rival factions. Now, U.S. and Iraqi security official are trying to make sense of the latest Shiite-linked violence linked to Asaib Ahl al-Haq, or “League of the Righteous,” or fighters inspired by the Tehran-support Hezbollah in Lebanon.

A U.S. security adviser to Iraq’s government said it’s unclear if the claims by Asaib Ahl al-Haq — posted on a website linked to the group — represent a return to attacks by its rank-and-file militants, who were blamed for some of the worst sectarian bloodshed in recent years. Or perhaps it’s a splinter faction using the group’s name and emblem, which is modeled on Hezbollah’s banner: an arm thrusting aloft an assault rifle. The adviser spoke on condition of anonymity because he was not authorized to brief reporters.

Senior Iraqi security officials repeatedly claim Iran is giving logistical and financial backing to Shiite extremist cells including Asaib Ahl al-Haq and a Hezbollah-modeled group believed led by Abu Mustafa al-Sheibani, who is accused by Washington of smuggling rockets and weapons from Iran and coordinating bomb attacks on U.S. forces.

In January 2008, al-Sheibani was added to the U.S. Treasury’s sanctions list.

“These groups are now the main militant forces among Shiites,” said a top Iraqi intelligence official, who spoke on condition of anonymity because of the sensitivity of the issue. “Attacks are growing and that could mean Iran is stepping up its aid.”

It comes at a delicate time.

Iraq’s political chiefs have been unable to agree on a government since March parliamentary elections, which were narrowly won by a Sunni-backed coalition. Shiite Prime Minister Nouri al-Maliki is battling to stay in power. But if the Sunni-supported bloc gets to form the next government, it could reduce some of Iran’s channels to decison-makers in Baghdad and open the door for more Sunni Arab involvement and investment.

Since the U.S.-led invasion, Iran has had powerful connections in Iraq through Shiite clerics such as Iranian-born Grand Ayatollah Ali al-Sistani and Muqtada al-Sadr, who has been in self-exile in Iran since 2007.

Al-Sadr’s Mahdi Army was the main Shiite militia in Baghdad for years before it was routed in a series of U.S.-Iraqi offensives and agreed to a pact in 2008 that generally halted attacks. Iraqi security chiefs now suspect that al-Sheibani’s network may have incorporated renegade Mahdi fighters for selected attacks in Baghdad, including recent mortar strikes on the protected Green Zone.

Asaib Ahl al-Haq does little to hide its admiration for Iran and its allies. A website linked to the group includes photos of the father of the Iran’s Islamic Revolution, the late Ayatollah Ruhollah Khomeini, and Hezbollah commander Imad Mughniyeh, who was killed by a car bomb in Syria in 2008.

The U.S. military said most of the six attack claims issued by Asaib Ahl al-Haq in recent weeks have been false or exaggerated, including the group’s account of a Katyusha rocket barrage on an American base outside Baghdad. A roadside bomb did strike a U.S. Humvee in the southern city of Basra, but it only caused flat tires, and a U.S. soldier was wounded by sniper fire in Amarah, about 200 miles (320 kilometers) southeast of Baghdad, the military said.

The claims — accompanied by the video clips — say the group plans more attacks against U.S.-led forces and “Baathists” — a reference to Sunnis who once enjoyed privileges under Saddam Hussein and his Baath party.