AP: A leading candidate in the contested race to lead Iraq’s new government insisted during a visit to Syria on Wednesday that he would not take part in any coalition headed by his rival, the current prime minister. 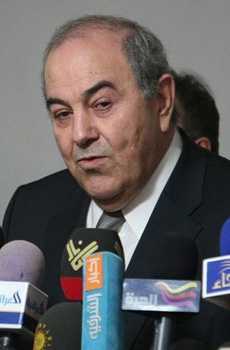 DAMASCUS, Syria (AP) — A leading candidate in the contested race to lead Iraq’s new government insisted during a visit to Syria on Wednesday that he would not take part in any coalition headed by his rival, the current prime minister.

“The Iraqiya bloc has a clear right, it is the list that won … If anything contrary to that happens, it will be considered unconstitutional and undemocratic,” Allawi told the Associated Press late Tuesday.

Allawi’s visit coincided with the arrival in Syria of Iraqi Shiite cleric Muqtada al-Sadr, who also leads a political group that has opposed keeping al-Maliki in power.

Allawi and al-Sadr, who rarely travels outside of his home base in Iran where he lives in self-imposed exile, held talks in Damascus in July in a meeting that was arranged by the Syrian president. But this time, Allawi said he had no plans to meet with al-Sadr.

Although both men have come out against al-Maliki, it is unlikely they would form an alliance because of deep differences in their constituencies. Al-Sadr leads a hardline and religious Shiite faction, while the bulk of Allawi’s Iraqiya alliance is made up of Sunnis.

Al-Maliki has been strongly courting al-Sadr in recent days in hopes of bringing the anti-American cleric’s followers into his camp so the prime minister can retain his post with widespread and united Shiite support.

Al-Sadr’s followers won 39 seats in the 325-seat parliament in Iraq’s national election in March, giving him considerable sway over who becomes the next prime minister.

Following the ballot, al-Sadr joined a coalition with al-Maliki’s list, but the deep-rooted hatred many in the Sadrist camp feel toward the prime minister — who’s jailed thousands of their supporters — has stalled any further development of their alliance.

Iraq is now in its seventh month without a government since the inconclusive March 7 elections. Allawi’s Iraqiya bloc won 91 seats compared to 89 for al-Maliki’s coalition, but neither won the 163-seat majority necessary to govern.

Reuters: Senior Iranian leaders know about the operations of...