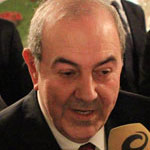 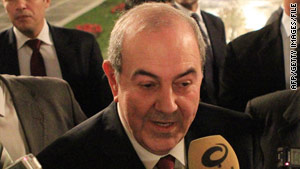 The region is “falling victim” to terrorist groups backed financially by Iran, he said.

Allawi’s political opponent is the National Alliance, which is made up of the State of Law Coalition and the Iraqi National Alliance — a coalition of powerful Shiite parties backed by Iran.

The alliance, which has nominated current Prime Minister Nuri al-Maliki as its prime minister candidate, now has a bloc with 159 seats. To form a government, a 163-seat majority out of 325 seats is needed.

Iraqiya, a largely secular and cross-sectarian bloc, has already said it won’t participate in any government headed by al-Maliki.

In Iraq, there is an environment that is conducive to terrorism, he said. Among the factors he cited were the fact that there is still no government formed eight months after the elections, a stagnant economy, high unemployment and a lack of services.

“Definitely in Iraq I can say categorically that Iran is trying even to bring about change to the political process according to their wishes and requirements,” Allawi said.

Zakaria asked Allawi if he suspected that a group backed by Iran was responsible for last week’s roadside bombing that killed four members of his Iraqiya party. Allawi didn’t assign blame to Iran, but said that there are many forces trying to influence the situation in Iraq.

Other countries in the Middle East are supportive of a strong, stable Iraq, he said.

“I don’t believe that there are leaders in the region who are trying to fuel extremism and bring about sectarianism. Unfortunately, only Iran,” Allawi said.