Iran Focus: London, Jun. 21 – Iyad Allawi, a former Iraqi Prime Minister and the de-facto leader of the opposition movement to Prime Minister Nuri al-Maliki, recently launched a stunning televised attack on Maliki accusing him of running a new dictatorship in Iraq and owing his Premiership to Iran’s theocratic rulers. 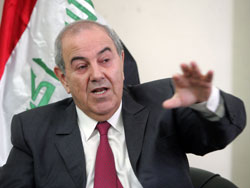 London, Jun. 21 – Iyad Allawi, a former Iraqi Prime Minister and the de-facto leader of the opposition movement to Prime Minister Nuri al-Maliki, recently launched a stunning televised attack on Maliki accusing him of running a new dictatorship in Iraq and owing his Premiership to Iran’s theocratic rulers.

Allawi made his remarks in an address on 10 June on the Al-Sharqiya Television. The following is the text of his remarks.

Iyad Allawi’s message to the People of Iraq

Great and wounded nation of Iraq, resisting tyranny and injustice; people of Iraq and courageous heroes, heroic and brave youths of Iraq, I salute you. Tyrants have today violated all the divine and earthly boundaries and values, injustice and tyranny has reached its peak, and they have spread corruption and evil in the country. They have suppressed the people and offended the dignity of the Arab nation. They have destroyed the honor of struggle and resorted to dictatorship, going to the height of suppression, killings, and deplorable political sectarianism. They are looting, plundering, burning and shedding blood. Wherever they go, they destroy it. They took smiles off people’s faces and targeted the youths to whom the future belongs. They set alight the wealth of the nation. They spread the fire of vengeance, hatred and animosity, defecting from the path of the prophet. They resorted to corruption and opened the door to anyone intending to harm Iraq and steal its wealth. We have fought for Iraq throughout our lives in order to save our people from fear and poverty. We struggled against injustice and dictatorship and made all sorts of sacrifices to honor, respect and sanctify the dear nation of Iraq and its supreme values.

Honorable and wounded nation of Iraq,
The night-worshiping bats, led and ordered by the leader of Dawa party and a bunch of his suppressive cohorts and agents, tried as they always do to levy fabricated accusations against us based on lies and deception. They tried to falsely accuse us of having a hand in the al-Zargeh killings. They have repeatedly falsely claimed that we are planning to carry out a military coup d’état; lies after lies. … Now, they are trying to craft a dishonest and wrong image of myself and hundreds of thousands of people and region, most of whom are honorable people, even if a few of them might have ill intensions. Are these claims not full of lies, deceptions, deceit and hypocrisy?

They lied to our people in the case of the one-hundred day issue. The boss of Dawa party has forgotten that he has been ruling for five years and now wants to hold other people to account about the one-hundred day deadline. He has forgotten that he has no plans for the government and he has never discussed a plan with ministers or parliamentarians so they can judge the actions of himself and those of his ministers.

He has forgotten that he has been the caretaker defense minister, interior minister, national security minister, and intelligence minister. Not only has he said nothing about his actions in these ministries and institutions, but he has tried to deceive people as well. Only God knows what to do with a tyrant and a liar.

He relied on foreigners. The Iranian regime helped him to become prime minister. And that is why I consider the international community responsible for the protection of Iraq against Iranian meddling and to ensure balance and equality in the political process. This process lost its balance so he can come to power and remain in power. They have an enormous responsibility about what is going on today in Iraq. [Maliki] grabbed suppressive institutions and organs as the international community remained silent. These counties equipped him with modern techniques, but despite it all, with the help of this very government, murderers, terrorists and leaders of al-Qaeda escaped, for example as it happened in the case of Basra prison. He imprisoned innocent people and brought corruption and human rights violations to new heights. God have mercy on us against this individual who lies to people and deceives them.

He things he can shut people’s mouths, crush their spirits and trample upon their independence and dignity. He has not learned the lesson from the movement of Imam Hussein, when Hussein famously made the historical vow that he will always steer clear of shame and dishonor. God have mercy on us when it comes to this individual [Maliki] who wants shame and dishonor for his people.

Honorable and wounded people of Iraq,
Under the watchful eyes of you and God, I vow that we will never abandon the arisen youths of Iraq who are resisting someone who wants to create a new dictatorship in Iraq. These youths represent the symbol of freedom and all of iraq’s freedom and liberation squares will enjoy our full support. They are acting in accordance with their legal rights in echoing the demands and ideals of the dear people of Iraq.
You sons and daughters of Iraq are the source of hope for us and all Iraqis that corruption, injustice and dictatorship will come to an end and that we can build a bright future for all.

The boss of Dawa party is facing a historical phase and is being firmly held to account. He – not his party or his faction but he personally – assembled a group of his ministers and supporting councils and cohorts in order to marshal club-wielders, agents and cronies. God have mercy on us when it comes to this person who is using all of Iraq’s resources to suppress its people.

God is great, and victory, dignity, pride and honor belongs to our resilient, persevering, courageous and wounded people who will overthrow dictators.

Bringing democracy to Syria and Iran

Daily Telegraph - Leader: Not all the arguments against...