AP: Iranian-backed militias present the most dangerous security threat for Iraq, outpacing al-Qaida-linked terrorists who have been blamed for the spike in violence there, a senior U.S. military officer said Tuesday. 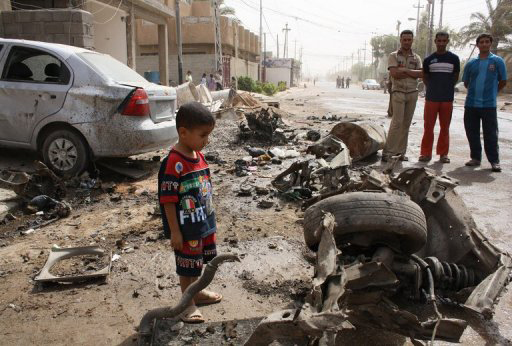 WASHINGTON (AP) — Iranian-backed militias present the most dangerous security threat for Iraq, outpacing al-Qaida-linked terrorists who have been blamed for the spike in violence there, a senior U.S. military officer said Tuesday.

Maj. Gen. Jeffrey S. Buchanan, the top U.S. military spokesman in Iraq, said the Shiite militias — together they have several thousand insurgents — are working to keep the Baghdad government weak and isolated. Decisions on the number of types of attacks launched by the three main militia groups, he said, are made inside Iran, including through their ties with the powerful Quds force.

The escalating threat underscores the dangers as the U.S. prepares to pull its troops out by the end of the year. Iraqi officials are discussing whether they want to have some American forces stay in the country past that deadline.

“The Quds force is providing direct support (to the militias) in terms of manning, equipping, provision of intelligence,” Buchanan said. “They have been at least exhibiting the behavior that lines up with a strategy that wants to keep Iraq weak and isolated from everybody else, all of its neighbors and the United States. And so they’ve been employing political means, economic means, security means in the way that these militant groups operate.”

Buchanan told reporters at the Pentagon that while al-Qaida in Iraq may be responsible for the recent wave of violence, including execution-style shootings outside Baghdad late Monday, the group is not as big a threat to the stability of the state as the Shiite militias.

The militias, he said, are much larger and have deeper ties political parties in Iraq as well as the connections to Iran.

He said there are 800-1,000 al-Qaida in Iraq — far fewer than they used to have. Of those, he said most are Iraqis, and only “a trickle” are foreign fighters who mainly come in across the Syrian border and are recruited as suicide bombers.

The three militia groups total more than that, with several thousand in the Promised Day Brigade, the militia group linked to anti-American cleric Muqtada al-Sadr and his Mahdi Army. Kataib Hezbolla is much smaller with hundreds of members, not thousands. And the third group, Asaib Ahl al-Haq, or Band of the People of Righteousness, is somewhere in the middle.

In other remarks, Buchanan said the U.S. has worked with Iraq security forces to prevent incidents of abuse or torture of detainees and ingrain more professional standards in the troops. He acknowledged there are occasional lapses, but he said the Iraqis are developing judicial systems to deal with such problems. It takes time, he said, for such change to take hold.

Buchanan shed little light on the U.S. preparations to get all troops out of Iraq by year’s end. Military leaders have said that they are keeping options open so they will be prepared to respond if the Iraqis ask that some American forces stay on past their December departure date.

Military leaders have said that the Iraqis have acknowledged they need further help in training and equipping their forces, gathering and sharing intelligence and protecting their air space and borders. But the continued presence of U.S. forces on Iraqi soil would also likely spur more violence.

Al-Sadr has called on U.S. troops to leave the country or risk more attacks.

And as violence has escalated in the past few months, senior U.S. officials have said part of it is an attempt to make it appear that the militants are causing the American withdrawal.

There are about 46,000 U.S. troops in Iraq. The withdrawal plan was spelled out in 2008 under an agreement reached between U.S. and Iraqi leaders.