Reuters: The United States will not “sit idly by” while its forces are harmed by Iranian-backed militias in Iraq, the top U.S. military officer, Admiral Mike Mullen, said on Thursday. 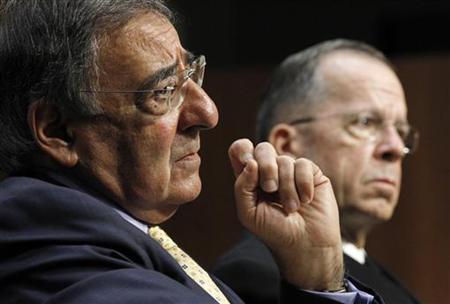 WASHINGTON (Reuters) – The United States will not “sit idly by” while its forces are harmed by Iranian-backed militias in Iraq, the top U.S. military officer, Admiral Mike Mullen, said on Thursday.

Mullen and U.S. Defense Secretary Leon Panetta told a Senate committee that while such attacks by groups linked to Iran had declined since the summer, the United States would not ignore it the attacks recurred.

“They (the Iranians) have been warned about continuing it … that if they keep killing our troops, that will not be something we will sit idly by and watch,” Mullen told the Senate Armed Services Committee.

“Iran needs to understand that we’re going to be around awhile here, making very clear to them that we’re not — we’re not simply going to ignore what Iran is doing in — in Iraq,” Panetta said.

Fourteen U.S. services members were killed in hostile incidents in Iraq in June. Most of the deaths were attributed by U.S. officials to rocket attacks by Shi’ite militias armed by Iran.

Mullen and Panetta said that the attacks stopped after a combination of military and diplomatic engagement with Tehran by Baghdad.

“They’re shipping EFPs and IRAMs. And the IRAMs are getting bigger and bigger. And so, there is a great downside potential for destabilizing particularly southern Iraq, that actually I think Prime Minister Malaki and the Iraqi leadership is concerned about,” Mullen said.

The U.S. military is scheduled to fully withdraw its remaining troops — numbering about 40,000 — from Iraq by December 31, although Iraqi politicians are trying to decide whether to ask Washington to leave some troops beyond 2011 to continue to train their army and police forces.

Mullen said the Obama administration would consult with Congress about the matter once it had a decision from Baghdad. “But we’re — honestly, we’re just not there yet. We’d be having, from my perspective, circular conversations about this, because we just don’t know what’s going on in Baghdad,” he said.

The Edmonton Sun: The federal government was complicit in...