Fox News: The leader of an Iranian dissident group has agreed to start relocating refugees who for years have been living in precarious conditions in an Iraqi camp. 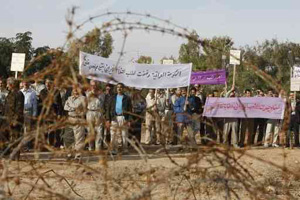 The leader of an Iranian dissident group has agreed to start relocating refugees who for years have been living in precarious conditions in an Iraqi camp.

Under an agreement recently struck between the United Nations and the Iraqi government, the 3,400 Iranian exiles at a site known as Camp Ashraf will move to Camp Liberty — the former U.S. military base near Baghdad — before making arrangements to leave Iraq and resettle elsewhere.

Maryam Rajavi, the Paris-based head of the group, averted a potential showdown Wednesday by announcing that, “as a gesture of goodwill,” 400 residents at Ashraf are prepared to go to Camp Liberty “at first opportunity.” The statement was obtained by Fox News.

Before Wednesday, the exiles had not said whether they would consent to the U.N. deal.

The statement, however, did not indicate when the rest of the residents might relocate. And it also did not mention one of the major remaining sticking points — the fact that in the United States, the group to which the exiles belong is a designated terror organization. As long as that label is attached to them, the residents can’t be resettled in the U.S. or Europe as part of any long-term solution.

The group known as the Mujahideen Khalq or MEK, has been based in Iraq since the 1980s.
Saddam Hussein gave them protection because they helped him fight Ayatollah Khomeini and the mullahs in Iran. Since the U.S. military toppled Saddam Hussein after the invasion in 2003, the Iranians have been urging Iraq to hand over the exiles, whom Tehran considers traitors and spies.

Technically, the MEK is still on the State Department’s Foreign Terrorist Organization list, placed there by President Bill Clinton because the group allegedly killed six American diplomats during the 1970s when the U.S. was supporting the Shah in Tehran. The group was reportedly placed on the list at a time when the State Department was attempting to engage Iran diplomatically.

But the State Department is reviewing that designation.

“We’re giving it serious consideration,” State Department spokesman Mark Toner said Wednesday, noting “no decision has been made yet.”

More than a dozen former national security advisers have called on the Obama administration to delist the MEK, claiming there’s no evidence today to support allegations of terrorism against the group.

More recently, the MEK and its affiliates have helped the U.S. and Western intelligence agencies. They provided information about the secret uranium enrichment facility in Natanz — a key intelligence breakthrough for the West.

A report this past August by Lincoln Bloomfield, a former assistant secretary of state, noted a “longstanding pattern” of western governments being “pressured” by Tehran to sanction the MEK. While the MEK is held responsible for the killing of six Americans in the 1970s,

Bloomfield cited claims that those responsible actually represented a “splinter” group no longer tied to the current MEK group.

Whether or not the U.S. changes the terror designation, the U.N.-Iraq plan for resettling the residents of Camp Ashraf ultimately aims to find a permanent home for the refugees.

Martin Kobler, special representative for the U.N. secretary-general, said in a letter Wednesday that the temporary relocation at Camp Liberty is “a necessary and indispensable first step towards a long-term solution.” He noted that individual countries will have to decide whether they will accept the refugees, but assured that the United Nations will conduct “24/7 monitoring” of the new camp until all residents leave Iraq. The letter also said the U.S. would visit Camp Liberty “regularly and frequently.”

Even after the deal was struck, rockets from an Iranian-backed militia were fired at the camp on Sunday and Tuesday. Residents remain in fear that the Iraqi government will turn them over to Iran where they would be tried as spies and traitors. More than 30 residents of Camp Ashraf were killed by Iraqi police last April during skirmishes after the U.S. military relinquished control of the camp.

“The transfer of the first group of residents is a test of the Iraqi Government’s attitude in respecting obligations as professed to the U.N. and U.S.,” Rajavi said.

The U.S. military also has a role to play in protecting the residents, since the U.S. disarmed the group in 2004 and gave them protected status.

AFP: A retired FBI agent who vanished six years ago...