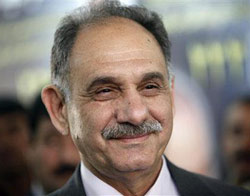 Deputy Prime Minister Saleh al-Mutlaq stood by an earlier charge that Iraq is becoming a new dictatorship under al-Maliki, a Shiite. He said Iraqis could eventually rise up violently if al-Maliki remains in his post, and pushed for a parliamentary vote of no-confidence in the prime minister if he remains in office.

“The longer al-Maliki stays in power, the higher the possibility of a divided Iraq,” al-Mutlaq said during an interview at his office in Baghdad’s heavily fortified Green Zone.

A spokesman for al-Maliki dismissed al-Mutlaq’s comments, saying they are “not worthy of a response.”

Al-Mutlaq’s Sunni-backed Iraqiya party has been boycotting parliament and Cabinet meetings since last month to protest what it sees as efforts by al-Maliki to consolidate power, particularly over state security forces.

Al-Hashemi denies the allegations. He remains holed up in Iraq’s semiautonomous northern Kurdish region. He is staying as a guest of Iraqi President Jalal Talabani, a Kurd, and is effectively out of reach of security forces under Baghdad’s control.

Although Iraqiya is a nonsectarian party, it depends heavily on support from Sunnis.

The boycott and standoff over al-Hashemi has paralyzed Iraq’s government, and pits the leaders of the country’s mostly ethnic- and sectarian-based blocs against each other.

Iraq’s Sunni minority dominated the government under the dictatorship of Saddam Hussein, but since he was overthrown, Shiites have controlled government.

The political feuding has been accompanied by a recent string of bloody attacks, raising fears of a new sectarian rift that could destabilize Iraq now that U.S. troops have left the country. Many fear the crisis will push Iraq toward a renewal of the large-scale sectarian fighting that pushed the country to the brink of civil war in 2006-7.

“The whole region is going to pay the price of the chaos that may occur in Iraq” if the political crisis continues and al-Maliki retains power, al-Mutlaq said. “Maybe what Iran wants to do is have the Arabs in Iraq fight (other Sunni-dominated Arab states) on behalf of their regime.”

Al-Maliki’s spokesman, Ali al-Moussawi, responded by saying “al-Mutlaq is now outside the political game, so of course he will make comments like this against the head of the Iraqi government.”

Iraqiya leaders including al-Mutlaq, as well as some al-Maliki aides, have been shuttling between Baghdad and the Kurdish region to seek support and ostensibly resolve the crisis in recent weeks.

Al-Mutlaq suggested the Kurds — a valuable political bloc — could be moving closer to Iraqiya’s point of view as the political stalemate drags on.

“The Kurds are getting more convinced that continuing to support the al-Maliki government is a mistake … and maybe boycotting Parliament is one of the ways to pressure the government to change,” he said.

The U.S. has been pushing Iraq’s bickering factions to work out their differences.

Al-Mutlaq is a contentious figure in Iraqi politics. The anti-Iran politician was banned from running in the last elections because of alleged ties to Saddam’s disbanded Baath party, but was allowed to resume his political life under a government power-sharing agreement that includes Iraqiya. He is one of three deputy prime ministers.

Al-Maliki is now seeking a vote of no-confidence against al-Mutlaq, potentially laying the groundwork for his ouster or arrest. He has stationed tanks and soldiers outside his deputy’s office — an order al-Mutlaq called on al-Maliki to rescind.

Al-Mutlaq last month characterized the prime minister as a dictator in a TV interview while the Shiite leader was visiting Washington. He stood by that charge Friday.

“Why should I regret it? I only said the truth,” he said.

Associated Press writers Qassim Abdul-Zahra and Sameer N. Yacoub in Baghdad, and Bradley Klapper in Washington contributed to this report.