National Law Journal: For nearly 20 months, the legal status of a dissident Iranian group has remained in limbo, mired in a U.S. State Department review of the association’s official designation as a foreign terrorist organization.
The National Law Journal 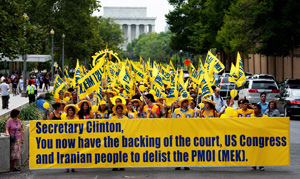 For nearly 20 months, the legal status of a dissident Iranian group has remained in limbo, mired in a U.S. State Department review of the association’s official designation as a foreign terrorist organization.

A federal appeals court in Washington directed the agency in July 2010 to take another look at the People’s Mojahedin Organization of Iran, saying the government violated the group’s rights during an earlier assessment. But the agency,  almost two years later, still hasn’t made a decision.

Frustrated by the government’s protracted silence, lawyers for the People’s Mojahedin, or PMOI, last week asked the U.S. Court of Appeals for the D.C. Circuit to immediately force the State Department to act.

The group’s prominent legal team — including Mayer Brown’s Andrew Frey in New York and Viet Dinh of Washington’s Bancroft — filed a petition on Feb. 27 that could force the government to either remove the resistance group from the terror list or require the State Department to rule within 30 days. The lawyers urged the appeals court to expedite the case, arguing that the lives of PMOI members and supporters are in danger at an exile camp near the Iran-Iraq border.

“The fact we have sat here for 20 months without any resolution really accentuated the need for court action,” said Dinh, a former top Justice Department lawyer in the George W. Bush administration and a founding Bancroft partner. “We’ve found ourselves in a situation where Secretary [Hillary] Clinton can achieve the same result of denial by sitting on our
application.”

In appellate court papers, the lawyers advocating for PMOI described the State Department’s inaction as an “unjustified pocket veto” of the group’s request for removal from the terrorist organization list. The attorneys contend the State Department only had 180 days by statute to resolve the dispute.

The Justice Department’s Douglas Letter, a senior Civil Division appellate attorney who specializes in terrorism litigation, declined to comment. In a court filing on March 1, Letter urged the D.C. Circuit to deny the petition from the Iranian resistance group, which is also called the Mojahedin-e Khalq Organization.

The final decision, Letter said, takes into consideration “delicate foreign relations concerns and complex national security determinations” that are unsuited for a judicial order compelling the State Department to make a decision.

PMOI’s advocates stretch well beyond Iranian community associations in northern California and in Texas, both of which spent hundreds of thousands of dollars last year on lobbying fees over the PMOI terrorist designation. Prominent former public officials representing Republican and Democratic administrations have advocated for the removal of the PMOI from the terrorist-organization list. Howard Dean, chairman of the Democratic National Committee from 2005 to 2009, spoke earlier this month at a conference in Washington in support of PMOI.

PMOI’s attorneys, who also include Greenberg Traurig partner Steven Schneebaum and Washington solo Allan Gerson, argue that the dissident group renounced terrorist activity in 2001 and is now bent on seeing a democratic, secular regime in Iran through social and political change.

PMOI, which was first designated a terrorist organization in 1997 under President Bill Clinton, wants to replace the current Iranian leadership through the National Liberation Army and through an opposition group called the National Council of Resistance of Iran.

Inclusion on the terror list, however, presents obstacles for fundraising and support. The State Department’s terrorist list comprises 50 groups, including al-Queda in Iraq, the Palestine Liberation Front and Hizballah. Federal law makes it a crime for anyone to provide material support or resources to a listed organization. Representatives and members of a designated group can be denied entry into, or removed from, the United States. Banks are authorized to freeze an organization’s funds.

DOJ said in court papers filed in an earlier version of the case in the D.C. Circuit that PMOI, founded in 1965 by students and intellectuals, engaged in terrorist attacks inside Iran in the 1970s that killed several U.S. military personnel and civilians. PMOI, Justice lawyers said, claimed responsibility in 1979 for the killing of an American Texaco executive.

DOJ’s legal team said PMOI had the burden to show that current circumstances had sufficiently changed to warrant revocation from the list. The United Kingdom removed the group from its terrorist list in 2008, followed by the European Union the next year.

The D.C. Circuit in the summer of 2010 revived PMOI’s legal challenge of its designation, weighing in for the fifth time in a series of related actions. A three-judge panel said the State Department denied the group timely access to unclassified information that the agency used to base its decision. The court remanded the case to the agency.

Dinh and Frey, a longtime U.S. Supreme Court advocate, said the State Department had no choice then but to delist PMOI.
The government, the lawyers said, cannot meet two critical prongs — that the group is still engaged in terrorist activity and that such activity threatens the security of the United States.

Frey said PMOI’s legal team did not file the mandamus petition lightly. DOJ, he said, was not pleased. “We would have preferred to have the secretary act,” Frey said. “I guess it’s fair to say my client’s patience was finally exhausted.”

The Iraqi government wants to shut down Camp Ashraf by April, presenting a challenge to relocate more than 3,200 residents. “That deadline is only two months away,” PMOI’s lawyers said in the D.C. Circuit petition. “Yet the Secretary of State shows no apparent sense of urgency to resolve PMOI’s petition for revocation by then.”

On Capitol Hill last week, Secretary Clinton told members of the House Foreign Affairs Committee that the State Department continues “to work on our review of [PMOI’s] designation as a foreign terrorist organization in accordance with the D.C. Circuit’s decision and applicable law.” The department, she also said, is “deeply concerned about the security and safety of the residents” at the refugee camp.

Throwing their weight behind PMOI’s legal fight are former top government officials in the national security, defense and intelligence arenas. Mukasey, who served as attorney general under Bush and who is now a partner at Debevoise & Plimpton in New York, said politics should have no role in assessing whether the Iranian resistance group remains on
the list of foreign terrorist organizations.

“When people say there’s a political component to this, that’s shocking,” Mukasey said in an interview. “There is no justification for it on the facts. The statute doesn’t say that if it’s politically convenient or advantageous you can keep them on the list.”

Advocates for PMOI in the United States, Mukasey said, are “well organized.” He said he is confident PMOI could “make a major contribution if they were allowed to function as a normal political group.”

Victoria Toensing, who advocated on Capitol Hill for the group last year, trumpeted PMOI’s petition in the D.C. Circuit, saying that the legal strategy was a shot in the arm to get the State Department’s attention. “People from different disciplines have looked at this issue and see a dissident group that opposes Iran,” Toensing said. “What’s not to like?”

Reuters: Iran's mines can supply raw uranium for its...