Tens of thousands of Sunni Iraqis rally against Maliki

Reuters: Tens of thousands of Iraqi Sunni Muslims took to the streets in Baghdad and other cities after prayers on Friday, in another show of discontent with Shi’ite Prime Minister Nuri al-Maliki. By Patrick Markey and Suadad al-Salhy 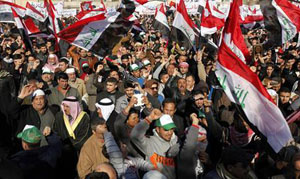 BAGHDAD (Reuters) – Tens of thousands of Iraqi Sunni Muslims took to the streets in Baghdad and other cities after prayers on Friday, in another show of discontent with Shi’ite Prime Minister Nuri al-Maliki.

Three weeks of mass protests reflect deep discontent among Sunnis who say Maliki’s Shi’ite-led government has marginalized their minority community, increasing worries Iraq may slide back into the sectarian violence of its recent past.

Sunni unrest erupted as the war in neighboring Syria, where mostly Sunni insurgents are battling President Bashar al-Assad, an ally of Shi’ite Iran, is stirring regional tensions and testing Iraq’s own fragile sectarian and ethnic balance.

“These gatherings and rallies are not against a community, a political party or a person. They are against the unjust intentions of a government,” Sunni lawmaker Ahmed al-Missari shouted in a speech to the seething crowd. “We will not accept being second-class citizens.”

The unrest is developing into the most serious challenge yet for Maliki, a Shi’ite nationalist whom many Sunni leaders accuse of sidelining them from power-sharing, just a year after the last American troops pulled out of Iraq, an OPEC oil producer.

Sunni lawmakers are also trying to win support from Maliki’s Shi’ite and Kurdish rivals to oust him with a no-confidence vote in parliament, but the premier’s foes remain deeply divided.

Maliki, a Shi’ite Islamist who spent years in underground exile from Saddam, has proven a tough opponent and survived an attempted no-confidence vote last year. His Shi’ite alliance remains the strongest bloc in the legislature.

Mass protests broke out in December after Finance Minister Rafaie al-Esawi’s bodyguards and staff were detained on terrorism charges. Officials say it is a judicial case, but Sunni leaders saw a sustained crackdown on their sect.
Thousands demonstrators have been camped out on a major highway near the Sunni stronghold of Ramadi, about 100 km (60 miles) west of Baghdad, before the point at which it splits, with one road leading to Syria and another to Jordan.

Violence has eased in Iraq, but Sunni-Shi’ite tensions remain raw after years of sectarian bloodshed following the U.S.-led invasion that toppled Saddam in 2003.

Many Sunnis say they feel left out since elections in a post-Saddam Iraq empowered majority Shi’ites. They say the government has allowed Shi’ite non-Arab power Iran too much influence. But Shi’ite leaders point to Sunnis in key posts such as speaker of parliament as proof of power-sharing.

In Falluja, 50 km (32 miles) west of Baghdad, Sunni demonstrators raised Saddam-era Iraqi flags, waving a banner that read: “The wisdom of today: the gallows is the end of a dictatorship, do not forget.”

Some carried caricatures of Maliki, one of them showing him with a bag full of dollars and fleeing on an Iranian plane.

More than 10,000 demonstrators also rallied in a central square after prayers in Mosul, chanting: “We are ready to sacrifice our blood and souls for Iraq.”

Demonstrations erupted in December a day after President Jalal Talabani flew out of Iraq for treatment following a stroke. A respected Kurdish statesman, Talabani has long been a moderating influence among Shi’ite, Sunni and Kurdish factions.

Some Iraqi Sunni leaders see a chance in the conflict across the border in Syria. If a Sunni regime follows the fall of Assad, they see benefit from Iran’s weaker influence and the shift in the region’s Shi’ite-Sunni power balance.
But the Sunni political leadership is sharply divided with demands ranging from Maliki’s ouster to the amendment of anti-terrorism laws they say officials use to target Sunni community.

Some Sunni Islamists want a change of government, or even demand an autonomous Sunni province bordering Syria. But more moderate leaders want to keep their posts within the power-sharing agreement.

“I have come here every day for two weeks, and my ambition is supporting this revolution,” said Akram Rasheed, 68, a protester in Mosul. “I have no request other than to topple this sectarian regime.”

(Additional reporting by a Reuters correspondent in Mosul and Kamal Na’ama in Anbar; Writing by Patrick Markey; Editing by Alistair Lyon)

The Hill: As the Middle East teems with masses...

UPI: It is hard to characterize the United States'...