MSN NZ News: A German rights group working with a Washington-based lawyer claimed their 70-page report “confirms the direct involvement of the government of Iraq in the attack” on September 1 in which 52 people were shot dead. 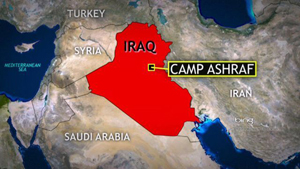 Human rights activists have accused Iraqi forces of carrying out a bloody attack on a camp of Iranian exiles in which 52 people were shot dead.

A German rights group working with a Washington-based lawyer claimed their 70-page report “confirms the direct involvement of the government of Iraq in the attack” on September 1.

Calling for a UN investigation into the attack, the Aachen-based Rights for Migrants group said interviews with the 42 survivors of the attack on Camp Ashraf, in central Diyala province, “unequivocally puts Iraqi forces at the scene”.

It alleged Iraqi police moved blockades guarding the camp to allow access to about 120 armed attackers, who were dressed in uniforms identical to those worn by a special Iraqi forces division and spoke with Iraqi accents.

“For two hours, the attackers scoured the camp, killing 52 and destroying millions of dollars in property. Every individual killed was shot in the head or neck, and many were handcuffed before being executed,” the report said.

It maintained that due to the close proximity of about 1200 Iraqi military and police forces stationed nearby it was “impossible that any rogue group of attackers could have entered Camp Ashraf without the knowledge, blessing or direct authorisation of the Iraqi government”.

It also says seven people were taken hostage, and were now reportedly being held in detention centres near Baghdad.

The Iraqi government has denied any involvement in the attack on the camp where a few members of the People’s Mujahedeen Organisation of Iran were residing.

The rest of about 3000 members of the group have already been relocated to a former military base, known as Camp Hurriya, or Liberty, on the outskirts of the Iraqi capital.

A US official said that while the attack on the camp “was reprehensible,” there was “no credible information to date that the Iraqi government was in any way involved”.

Iran executed nuclear scientist who may have defected