Iraq’s Maliki gets U.S. arms, but no Apache gunships

UPI: Nouri al-Maliki does not appear to be getting the Apache attack helicopters and unmanned aerial vehicles he’s pressed U.S. President Barack Obama for to bolster Baghdad’s struggle against al-Qaida insurgents, but he’s still expected to get other weapons. United Press International 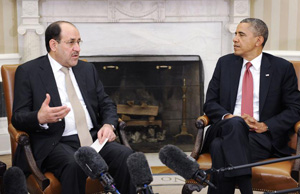 BAGHDAD, Nov. 4 (UPI) — Iraqi strongman Nouri al-Maliki does not appear to be getting the Apache attack helicopters and unmanned aerial vehicles he’s pressed U.S. President Barack Obama for to bolster Baghdad’s struggle against al-Qaida insurgents, but he’s still expected to get other weapons systems despite the misgivings of U.S. lawmakers.

During Malikli’s meetings with top U.S. officials during a visit to Washington last week, including a Friday session with Obama in the White House, he urged the Americans to speed up the delivery of 36 Lockheed Martin F-16IQ Block 52 fighters to help Iraq’s security forces.

But U.S. officials don’t see how that kind of air power will necessarily be of much use against agile, small groups of insurgent forces or suicide bombers.

And given Washington’s undisguised dismay at Maliki’s autocratic inclinations and the failure of his Shiite-dominated government to engage with minority Sunnis and Kurds since the U.S. military withdrawal in December 2011, the burly Iraqi prime minister does not seem to have won enthusiastic support during his first visit to Washington since the pullout two years ago.

In that time, al Qaida, on the ropes when the Americans departed, has recovered in their absence and is waging a murderous offensive against Baghdad in which nearly 7,000 people have been killed so far this year alone amid fears of a new civil war.

Even Iraq’s growing importance in the civil war in neighboring Syria, where Iraqi jihadists have become one of the most powerful rebel forces fighting the regime of President Bashar Assad, does not appear to have swayed Obama’s strategists into meeting Maliki’s drive to acquire the Boeing AH-64A/D Apache gunships, ideal counterinsurgency weapons, for fear he’ll eventually use them against his political rivals in Iraq.

He’s also been lobbying, for far unsuccessfully, for an undisclosed quantity of Lockheed Martin’s AGM114 Hellfire missiles, carried by the AH46s.

U.S. lawmakers proved unresponsive when he pressed the U.S. Congress on these weapons, and pushed him in return to do more to prevent Iran airlifting weapons to its ally Assad through Iraqi air space.

Still, Maliki’s in line to receive an impressive array of U.S. weapon systems and other military equipment along with the 36 F-16s Baghdad he’s ordered, with deliveries scheduled to start in 2014.

Maliki wants them now, and ultimately wants to acquire 96 of them to rebuild an air force that under Saddam Hussein was one of the most powerful in the Middle East.

The Obama administration’s extremely reluctant to involve U.S. forces in the Middle East quagmire again, but it also wants to halt the jihadist surge across the region before it coalesces into a cohesive juggernaut, and this may point to an easing of restrictions on arms sales to Maliki.

As it is, the prospect of $6 billion-$7 billion in sales could yet prove irresistible to Lockheed Martin and other U.S. defense companies involved in the F-16 production line at a time of sharp domestic defense cuts.

Iraq’s lack of control over its air space was one reason why the U.S. Defense Department had argued that U.S. forces should remain in Iraq beyond 2011.

In the end, the U.S. pulled out its forces because Maliki’s government refused to grant them immunity from prosecution.

Another pending U.S. contract, worth $339 million, involves the sale of 19 mobile radio systems and 10 microwave systems.

The U.S. Defense and Security Agency has also informed Congress of the potential sale to Iraq of 50 M1135 Stryker armored fighting vehicles worth $900 million. The 8-wheeled, 16.5-ton AFV is built by general Dynamics Land Systems Canada.

Despite all this, Maliki has dropped heavy hints he might seek advanced weaponry elsewhere, particularly Russia.

Reuters: Afghan insurgents are being trained inside Iran and...