AFP: UN rights experts demanded Monday that Baghdad get to the bottom of what happened to seven Iranian opposition members missing since a September attack on a refugee camp in Iraq. 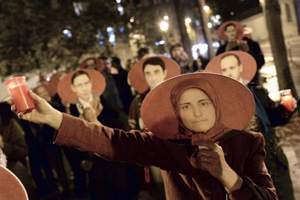 Geneva (AFP) — UN rights experts demanded Monday that Baghdad get to the bottom of what happened to seven Iranian opposition members missing since a September attack on a refugee camp in Iraq.

“We call upon the government of Iraq to speed up the investigations in order to disclose the fate and whereabouts of the individuals,” the United Nations Working Group on Enforced or Involuntary Disappearances said in a statement.

The seven Iranian exiles — six of them women — are members of the People’s Mujahedeen Organisation of Iran (PMOI) and disappeared after a September 1 attack in Camp Ashraf, northeast of Baghdad.

The UN experts lamented that the facts of what happened had yet to be clearly established three months after the attack that left 52 people dead.

The UN experts did not explicitly take sides, but did make reference to the allegations against the Iraqi security forces.

“All of those killed reportedly died as a consequence of gunshot wounds, mainly in the head or neck, (and) a number of those killed were found with their hands tied, an act apparently committed prior to their deaths,” Monday’s statement added.

The experts also voiced concern that the seven missing camp residents might be forcibly returned to Iran, where they could risk persecution or ill-treatment — something that would be a violation of international law.

They urged Iraqi authorities “to take all necessary measures to clarify the whereabouts of the missing individual, guarantee their safety and richts and prevent their extradition to Iran”.

The PMOI was founded in the 1960s to oppose the shah of Iran and later the country’s clerical rulers.

The group set up camp in Iraq during Saddam Hussein’s war with Iran in the 1980s, but was disarmed after the US-led invasion of Iraq in 2003 toppled Hussein, and today’s Shia-majority and Iran-friendly government in Baghdad is eager to see it move elsewhere.

Many of the camp’s residents have already been relocated to Camp Liberty, a former US military base on the outskirts of Baghdad, but the PMOI has raised alarm about safety there.

Scores of PMOI members have been killed in over a dozen attacks on their camps since US troops withdrew from Iraq at the end of 2011.

AFP: US Secretary of State Condoleezza Rice will travel...