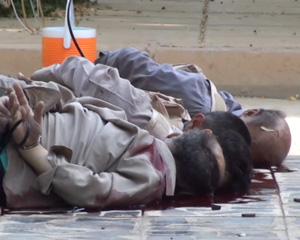 London, 1 Sep – It has been two years since the Camp Ashraf massacre. On September 1, 2013, fifty-two members of the PMOI (or Mujahedin-e Khalq, MEK), unarmed and defenceless, were killed, with seven other people being abducted, by Iraqi forces on the request of the Iranian regime.

The Iraqi military forces killed, execution-style, many of the residents. The US and the UN guaranteed protection to these people who were considered “protected persons”.

As highlighted in an article published by the NCRI, seven other PMOI members who were kidnapped in the assault were recognised by Amnesty International as being “at risk of torture and other ill-treatment”.

Former president of the European Parliament’s Delegation for Relations with Iraq and current president of the EIFA (European Iraqi Freedom Association), Struan Stevenson, documented the ill and shocking treatment of the Ashraf residents in his book “Self-Sacrifice: Life with the Iranian Mojahedin”.

He documented how Iraqi military stormed the camp under the cover of darkness in preparation for the attack beginning at 6am on 1st September, 2013. He described how nine severely injured residents were taken to the camp clinic by fellow residents, only to be “executed by Iraqi military personnel on their hospital beds”.

Stevenson described how the attack continued for hours, and “despite repeated pleas for the UN or US to intervene, there was complete silence and inactivity from both”. A UN official eventually arrived, but it was hours after the massacre had ended. The Iraqi government denied any involvement and international media failed to report (or reported very little), focusing instead on events in Syria.

Stevenson, along with MPs, congressmen, senators and other prominent figures, had predicted a looming massacre, but their warnings went ignored. He said: “…intelligence reports from inside Iran made clear that the Mullahs saw the Syrian crisis and the West’s ineffectiveness as ideal cover for a brutal strike. Despite warnings to US Secretary of State John Kerry and others of the inevitability of an attack, no action was taken to protect the unarmed men and women in Ashraf, who subsequently forfeited their lives.”

Stevenson is only too aware that the situation would have been avoidable had the West listened to the warnings. He further criticised the US for not seeking the release of the hostages – a case that remains unsolved to this day. Furthermore, the UN failed to conduct an investigation and no one was held accountable for this tragedy.

The NCRI, Iran’s Parliament-in-exile has been repeatedly calling on the UN Secretary-General and the High Commissioner for Human Rights to properly investigate the incident. They have been seeking justice and want to see former Iraqi Prime Minister Nuri Maliki and the Iran’s supreme leader Ali Khamenei brought to justice for this “horrendous and despicable crime against humanity”.

The Times: Iran became the number one country in...