Sunday Times: Criminal Assets Bureau takes action against Thomas and Sean McGuinn who are estimated to have generated in excess of €100m from their global smuggling operation 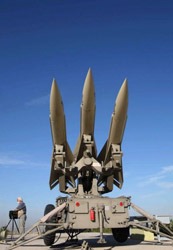 The Criminal Assets Bureau (Cab) has frozen almost €7m held in bank accounts controlled by an Irish aviation company which supplied military technology worth an estimated €100m to the armed forces of Iran in contravention of international trade sanctions.

In a case which has “astonished” gardai and government officials, Mac Aviation, a small Sligo-based company run by Thomas McGuinn, 73, and his son Sean, 40, was used to purchase military and aircraft technology which was then sold on to Tehran via a network of middlemen. Among the recipients of the technology was a firm linked to Iran’s nuclear and ballistic missile programme.

The McGuinns are estimated to have generated in excess of €100m from their global smuggling operation, run from a remote cottage near Drumcliff using two telephone lines, a computer and fax machine.

The Cab applied to the high court to freeze the company’s accounts last year, arguing that they represent the proceeds of crime, but reporting restrictions on the case were only lifted last week. The company had sought to have the proceedings heard in secret on the grounds that it would suffer commercially, according to legal sources. The €7m is among the largest amounts ever seized by the bureau.

The scale of the McGuinns’s activities, which were first revealed in The Sunday Times last year, has surprised investigators. Over €30m passed through the company’s bank accounts in Dublin between 2007 and 2009 alone. But the authorities are convinced the McGuinns have deposited millions more in secret offshore accounts that have yet to be identified.

The bureau suspects the two men lodged millions in bank accounts in Tehran, where it cannot be seized by the Irish authorities, according to sources at Garda Headquarters in the Phoenix Park.

A number of properties, businesses and land banks in the west of Ireland, reputedly owned by the father and son, may be seized in the coming months.

Fachtna Murphy, the garda commissioner, ordered an operation to identify and confiscate the McGuinns’ assets last year following a request from the United States.

Cab’s investigation subsequently uncovered a financial trail which led to the discovery of secret bank accounts, front companies and transport firms across the globe. These were used by the McGuinns to purchase military technology from legitimate manufacturers which were then sold at inflated prices to the Iranian military.

The aviation company circumvented international laws, which regulate the sale of military goods, by claiming it was purchasing the technology for governments who wished to remain anonymous. If questions were asked, it claimed to be renting aircraft parts to lessors in countries including Bangladesh, Nigeria, Ghana and Libya.

The McGuinns are said to have exploited Ireland’s lax banking regulations to receive millions in clandestine payments from the Iranian military. In most cases, lodgements were sent from companies in the Middle East to accounts opened in Ireland, Switzerland, Britain as well as other countries.

Irish banks were unwittingly involved in some of the transactions. In one, an Irish bank official was used by Mac Aviation to advance a deal with Tehran to purchase helicopter engines. The official sent a copy of a draft banking guarantee for €3.84m to a company in Tehran to help move the deal forward.

Sean McGuinn declined to comment when contacted by The Sunday Times last week. Calls to his father went unanswered.

The Cab investigation is part of a wider global inquiry involving police and intelligence services in Europe, Asia, Africa, Canada and the United States.

The American strand of the inquiry has established that the McGuinns dealt with the Iranian military through frontmen including Hossein Ali Khoshnevisrad, 55, a Tehran businessman.

Khoshnevisrad, arrested in San Francisco in March 2009 off a European flight, is charged with purchasing cameras for fighter bombers from US firms and smuggling them to Iran.

He is awaiting trial, but is said to be helping the American authorities with their inquiries into Mac Aviation and the McGuinns.

America is seeking the extradition of the McGuinns over breaking embargoes against Iran. The two were indicted by a US court in March 2009 and, if extradited and found guilty, could be jailed for 20 years. The Department of Justice is considering the extradition request, but sources say the McGuinns are likely to face further indictments.

The scale of the smuggling operation will increase demands for tighter controls on Irish firms trading in military and aircraft technology.

Thomas McGuinn was convicted in Florida in 1994 for selling night-vision goggles to the Iranian military yet appears to have recommenced his smuggling activities on his return to Ireland. It is unclear if the authorities were aware of his company’s existence.

By Jubin Katiraie Despite the huge outbreak of coronavirus...