AFP: Iran said on Tuesday that claims made by some Iranian officials that its passenger planes were being denied refuelling by airports in Britain, Germany and the United Arab Emirates are “false.” 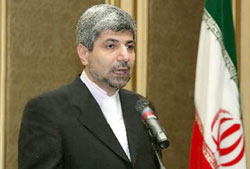 TEHRAN, July 6, 2010 (AFP) – Iran said on Tuesday that claims made by some Iranian officials that its passenger planes were being denied refuelling by airports in Britain, Germany and the United Arab Emirates are “false.”

“That information is false,” he said when asked to confirm reports that airports in Britain, Germany and the UAE had denied refuelling Iranian passenger planes as part of unilateral sanctions imposed by the United States.

On Monday, Mehdi Aliyari, secretary of the Iranian Airlines Union, was quoted by the ISNA news agency as saying that Iranian planes were being refused refuelling at airports in the three countries.

“Since last week, after the passing of the unilateral law by America and the sanctions against Iran, airports in England, Germany, the UAE have refused to give fuel to Iranian planes,” Aliyari said, adding that operations of national carrier Iran Air and private airliner Mahan Air had already been affected.

Several Iranian lawmakers warned in response that Tehran should take retaliatory action and stop refuelling planes from the three countries concerned which land in Iran.
Mehmanparast said on Tuesday that “reporting the information (of fuel being denied) is part of a psychological war against Iran.”

A report in Tuesday’s German-language edition of the Financial Times Deutschland meanwhile said that oil giant BP had not renewed a contract to supply Iranian airlines with fuel after it had expired at the end of June.

That could explain the claims of Iranian officials.

The FT Deutschland cited an incident in which an Iran Air plane had to land in Vienna because it had been refused a refuelling at Hamburg airport in northern Germany.
“We won’t comment on individual contracts with every airline,” BP told the German daily.

“But we respect, in all the countries where we operate, the local rules regarding sanctions.”

Last Thursday, US President Barack Obama signed into law the toughest ever US sanctions on Iran, which he said would strike at Tehran’s capacity to finance its nuclear programme and deepen its isolation.

The measures, on top of new UN and European sanctions, aim to choke off Iran’s access to imports of refined petroleum products like gasoline and jet fuel, and to curb its access to the international banking system.

World powers led by Washington suspect Tehran is making nuclear weapons under the guise of a civilian atomic programme. Iran says its nuclear programme is purely for peaceful purposes.