Lawyer of woman facing stoning in Iran flees to Norway

AFP: The lawyer for a woman sentenced to death by stoning in Iran for adultery has fled to Norway where he is considering seeking asylum, he said in Oslo Sunday. 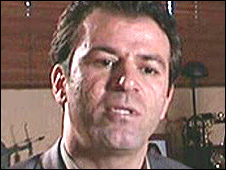 OSLO (AFP) — The lawyer for a woman sentenced to death by stoning in Iran for adultery has fled to Norway where he is considering seeking asylum, he said in Oslo Sunday.

“In a way you can say that I have asked for asylum,” Mohammad Mostafaie told AFP on the sidelines of a press conference in Oslo shortly after arriving in Norway after fleeing his country by way of Turkey.

The human rights lawyer added that he had already obtained a visa allowing him to stay in the Scandinavian country for a year, but wanted to wait with the actual asylum application until he had had a chance to discuss the matter with his wife in Iran.

Mostafaie has been representing Sakineh Mohammadi-Ashtiani, a 43-year-old mother of two, who was sentenced to death by stoning after she was found guilty of adultery.

Her sentence, which has sparked an outcry in Western countries, has been temporarily halted by judiciary chief Sadeq Larijani.

Mostafaie, who says he has rescued 18 of his 40 clients facing death sentences in Iran in recent years, has himself faced increasing pressure from the authorities in Tehran and says he was finally forced to flee after a warrant was issued for his arrest at the end of July.

He told the press conference Sunday that he did not think his departure would have a negative impact on Mohammadi-Ashtiani’s case, since other lawyers were prepared to pick up where he had left off.

And “this will highlight Sakineh Mohammadi-Ashtiani case even more,” he said, adding that he did not think Tehran would dare to allow her stoning sentence to be carried out or to harm her physically in other ways.

“I do not think she will be hurt … The Iranian authorities have already paid a huge price for the case (and) the international reputation of Iran has already been negatively affected because of the way it has been handled,” he said.

Mostafaie fled Iran on July 29, first by car, then on foot and finally riding over a mountain pass on horseback across the Iranian border to Turkey.

“The most difficult part was that I’ve never sat on a horse in my whole life,” he confided.

“I had to do that for five hours across the mountains where it was cold and snowy … At the border I had to run across, with police posts on both sides … and ran the fastest I’ve ever done,” he said.

Mostafaie said he had not been planning to travel on to Norway when he left Iran, and had simply been trying to get away from the authorities.

His wife Fereshteh Halimi had already been arrested and taken to the infamous Evin prison in Tehran, where she was held in isolation for 14 days, he said.

“The only reason she was arrested was that the authorities wanted me to turn myself in,” he said, adding that he had been sick with worry, but had decided it was best to leave.

Mostafaie, who learned Saturday that his wife had been released, was arrested when he arrived in Turkey due to an alleged passport problem and held in custody for six days.

But a human rights group had put pressure on the Turkish government to release him and the Norwegian embassy in Ankara helped buy him a ticket to Oslo.

The lawyer said he was glad to be in the Norway and that he hoped his wife and seven-year-old daughter could soon join him.

The foreign minister lamented that “the pressure on courageous defence lawyers such as Mostafaei is so great that they are compelled to flee,” calling on Iran to respect human rights and fulfill its international obligations.

Italy to send envoy to Iran

Over a year since the coronavirus first found its...