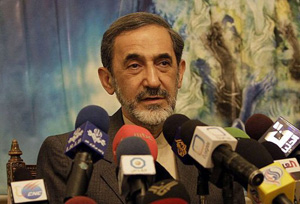 “This report that ‘we are ready for talks with America about the nuclear programme’ is denied,” the office of Ali Akbar Velayati said in a statement.

Velayati had told reporters at a news conference in the Iranian embassy in Damascus on Monday: “While we do not have any faith in the American government… Iran is ready for talks on its nuclear programme.”

The veteran diplomat and top Khamenei advisor said in his Tuesday statement that the comments made at the conference had been: “Iran has never ruled out negotiations and this is not just about America but… talks can take place with other countries such as the members of P5+1 and the Vienna group with respect to Iran’s reservations.”

The United States has led international efforts to curb Iran’s nuclear drive and it has had no diplomatic ties with Iran for over three decades.

The Vienna group which is made up of the United States, France and Russia is involved in a nuclear fuel exchange proposal with Iran.

Last week Iranian President Mahmoud Ahmadinejad said he was ready for face-to-face talks with his US counterpart Barack Obama on “global issues.”

On Sunday US Secretary of State Hillary Clinton said Washington remains “open to engagement” with Iran while adding that Tehran had “to reassure the international community by words and actions as to what their nuclear program is intended for.”

Washington and other world powers suspect that Iran is masking a weapons drive under the guise of a civilian atomic programme. Tehran insists its nuclear programme has no military aims.

BBC: Iraq has expressed concern about troop build-ups by...

Reuters: Iran said on Monday it would resume uranium...