Wall Street Journal: Iran and the U.S., in their closest high-level near-encounter since a barrage of international sanctions were imposed on Tehran this summer, signaled that the game has changed, but Washington still seems unsure of the rules.

By JAY SOLOMON and FARNAZ FASSIHI 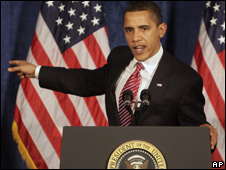 UNITED NATIONS—Iran and the U.S., in their closest high-level near-encounter since a barrage of international sanctions were imposed on Tehran this summer, signaled that the game has changed, but Washington still seems unsure of the rules.

Iranian President Mahmoud Ahmadinejad both encouraged Western powers with offers of talks and insulted Americans with his 9/11 conspiracy theories.

His erratic behavior cast doubts in Western capitals about the utility of diplomacy in containing Tehran’s nuclear program, and whether Mr. Ahmadinejad has the support at home to deliver on his promises.

His statements this week also raised new questions about what steps President Barack Obama and his allies must take next if negotiations don’t commence this fall. The White House had argued that a series of sanctions by the U.N., U.S. and European Union has pushed Tehran toward a diplomatic outreach and exposed fissures in the ruling elite.

“I was ready today to welcome the progress made in this week’s meeting…on Iran,” U.K. Deputy Prime Minister Nick Clegg told the U.N. General Assembly on Friday. “But instead, once again, an issue of grave global concern has been overshadowed by the bizarre, offensive and attention-grabbing pronouncements by President Ahmadinejad.”

Iran’s president completed his media blitz of New York Friday by appearing to make Tehran’s most specific offer in recent months for direct negotiations with the U.S. and its diplomatic partners on the nuclear issue.

Mr. Ahmadinejad said meetings could be arranged as early as next month and told European Union’s foreign-policy chief, Catherine Ashton, to contact Tehran. He also suggested his government would end its production of enriched uranium if Western powers renewed an offer to ship nuclear fuel to Iran.

“We were not interested to carry out 20% enrichment. We were forced to do it to support the [medical] patients,” Mr. Ahmadinejad told a U.N. news conference. “We will consider halting uranium enrichment whenever nuclear fuel is provided to us.”

Even as he appeared conciliatory, though, he stood by comments he made Thursday suggesting the U.S. government initiated the Sept. 11 attacks.

U.S. and European officials appeared exasperated, noting Ms. Ashton had been trying for over a month to get a meeting with Iran’s nuclear negotiator, Saeed Jalili, but her letters and calls hadn’t been returned.

U.K. Foreign Minister William Hague met with his Iranian counterpart, Manouchehr Mottaki, for a half hour on Wednesday. But the British diplomat said it is increasingly difficult to ascertain who is making decisions in Tehran.

“There are different power centers.…It’s a totally different power structure to anything in a Western democratic society,” Mr. Hague said in an interview. “If negotiations begin, it depends on the Iranian attitude toward the negotiations.…Is it a tactic to buy time or a real negotiating process?”

Analysts familiar with Mr. Ahmadinejad—who has a long record of sending mixed messages—say his statements this week reflect a tug of war in Iran over whether to normalize relations with the U.S., and who would claim it as a diplomatic victory.

“There is a sort of competition inside Iranian political circles over talking to the Americans. There are a lot of people, even among hard-liners, who don’t want to see Ahmadinjead using talks with the U.S. as a winning card for himself,” said an adviser to Iran’s foreign ministry.

Supreme Leader Ayatollah Ali Khamenei, who has the last word in all matters of state, doesn’t appear on board with talking to the U.S. because Iran’s role as the “anti-American leader of the Muslim world would be compromised,” said the adviser.

In the past month, Mr. Ahmadinejad has faced growing criticism from conservative allies, many of whom are now vocally blaming him for ignoring Mr. Khamenei, parliament and the foreign ministry.

Senior U.S. officials again said Friday that they remained open to talks, and told Tehran to follow up with Ms. Ashton’s office.

But Mr. Obama on Friday made an expansive effort to talks around the Iranian government. Mr. Obama gave an interview to the British Broadcasting Corp.’s Persian service, which is believed to be among the most listened to foreign broadcasts inside Iran. In addition to condemning Mr. Ahmadinejad’s 9/11 comments, the U.S. president stressed that the mounting economic problems inside Iran were the making of Tehran’s leaders.

The White House has repeatedly said it isn’t overtly seeking regime change in Iran, as George W. Bush’s administration once did. U.S. officials say they believe the new sanctions are increasingly causing splits inside the Iranian government and stoking unrest among Iran’s merchant class.

“This is a matter of the Iranians’ government I think ultimately betraying the interests of its own people by isolating it further,” Mr. Obama told the BBC.

U.S. and European officials said Tehran could be sending conflicting signals to buy time with the international community while pushing forward with its nuclear program. In recent months, Tehran has begun enriching uranium to levels closer to weapons grade while increasingly restricting the movements of inspectors from the U.N.’s nuclear watchdog, the International Atomic Energy Agency.

—Joe Lauria contributed to this article.

Iran’s Ahmadinejad tells Europe to “take back the Jews”