Reuters: Iranian Foreign Minister Manouchehr Mottaki warned European countries on Tuesday that Iran might retaliate in kind for their denial of fuel to Iranian aircraft because of U.S. sanctions, a news agency reported. 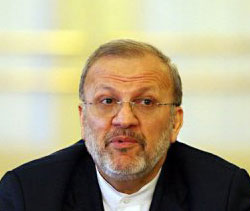 TEHRAN Oct 26 (Reuters) – Iranian Foreign Minister Manouchehr Mottaki warned European countries on Tuesday that Iran might retaliate in kind for their denial of fuel to Iranian aircraft because of U.S. sanctions, a news agency reported.

Iran, at loggerheads with the West over its nuclear programme, has been hit by a new wave of international sanctions over its uranium enrichment activities, which the West fears are part of a plan to build a nuclear bomb, a charge Tehran denies.

“We have given the necessary warnings and if the current situation is not corrected in some European capitals, they will be faced by a reciprocal action from Iran,” Mottaki was quoted as saying by the semi-official Fars news agency, without giving details.

A Hamburg Airport spokeswoman confirmed in July that two Iranian aircraft had taken off from a German airport without refuelling and other reports said Iranian planes had been denied fuel in Germany, Britain and a Gulf Arab state.

The U.S. legislation would punish any company worldwide that exports gasoline or other refined petroleum products to Iran.

But Washington has not made clear whether its new sanctions are intended to require firms to refuse to refuel Iranian aircraft at airports in third countries.

Major oil companies including Royal Dutch Shell have said they will comply with the new U.S. sanctions.

Iran is a crude oil producer and a member of the Organisation of the Petroleum Exporting Countries (OPEC). But it has to import some refined oil products to meet domestic demand because of a shortage of refining capacity.

Iran, which had for a long time imported 30-40 percent of its gasoline needs, announced last month that it had started exporting the fuel.

Iran’s hardline rulers have repeatedly shrugged off the impact of sanctions and say the country’s nuclear work is aimed at generating electricity. (Editing by Tim Pearce)